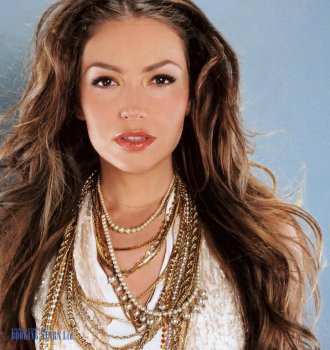 Mexican pop singer Ariadna Thalía Sodi Miranda (pseudonym Thalia) was born on 25th August, 1971 in Mexico. Ariadna speaks and sings in five languages, including English, Spanish, French, Portuguese, and Pilipino. She is the most famous and popular Mexican celebrity beyond Mexican borders. Thalia recorded 13 studio albums and 69 singles. She worked with some of the most popular musicians in the American music industry.

Thalia is not just a singer; she focuses on acting as well. In her early career, she was cast for roles in several popular Mexican soap operas. Eventually, it brought her the title of “The Queen of Telenovelas.” In 2013, the actress got her own star on the Hollywood Walk Of Fame. Thalia also wrote four books and established a fashion brand.

Ariadna’s mother Yolanda Miranda Mange was her manager from 1980 to 1999. Her father Ernesto changed many professions, from a researcher to a police officer. He died when the singer was just six years old. His death had a huge psychological impact on the little girl. Thalia couldn’t speak for a year.

The young woman started her professional singing career when she was just 10 years old. She became a part of a child band Din Din. Two years later, Thalia made her first appearance on television.

In 1986, the singer replaced Sasha Diez Barroso in the band Timbiriche. It was her first important step toward popularity. A year later, she landed a good role in a popular telenovela Pobre Señorita Limantour (Poor Senorita Limantour).

In 1990, Talia recorded her first solo album Thalia. The LP didn’t make it into the charts but was certified golden in Mexico twice. In 1992, the young woman dedicated most of her time to her acting achievements. Thalia filmed three soap operas, which got her the aforementioned title “The Queen of Telenovelas.”

In 1995, Thalia signed a contract with EMI Latin and released the successful album En Extasis. The LP contained an international hit "Piel Morena". The album conquered German, Hungarian, and USA charts. With time, it was certified platinum in the USA.

In 1997, Thalia released the album Amor A La Mexicana, which was produced by the famous Latin American musician Emilio Estefan Jr. He also worked on her next LP Arrasando (2000). It was a very successful LP, 5 singles from which became hits. The song “Entre el Mar y Una Estrella” conquered the Billboard’s Hot Latin Tracks chart.

In the beginning of 2000’s, Thalia was trying to earn more popularity on the international arena by recording some of her sons in English. However, they didn’t become as popular as she hoped. In any case, it was impossible to book Thalia for any event in Mexico and beyond.

Her popularity peaked from 2000 to 2002. In 2003, it started to wane. She took a break between 2007 and 2012 after giving birth to a son. Upon returning, Thalia started conquering the charts once again. Her last album to date Latina (2016) reached the top spot of the US Latin Pop (Billboard) chart.