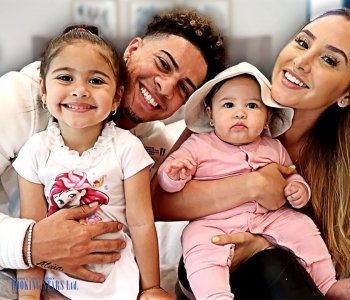 Having set up their YouTube channel in 2016, Austin McBroom and Catherine Paiz became very well-known for the pranks that they would play on each other. They took part in challenges and began blogging day to day life. The family mainly use humor to entertain their viewers and over time, they became very successful, earning more than 5 million dollars per year.

In June 2018, they held a charity basketball event and announced they would donate $100,000 towards their charity of choice and any further money the event made. The event was a sell-out and included a performance from Glenn Travis. When the ACE Family only donated $75,000 and gave no explanation for why, it caused controversy for fans who deduced they made a higher amount than that, but never went through with their promise to donate every piece of money made. However, other fans have theorized that the other money might have gone towards payment for the event.

Throughout July and August 2018, many tweets posted by Austin were found, which were considered racist and/or sexist. Most of these tweets were posted between 2011 and 2013 and were called out for being offensive particularly to black people, Asian people, and women in general. Many of the tweets had not been taken down until discovery and the ACE Family has since deleted the thread.

In August 2018, the ACE Family announced both on social media and in a vlog that their house was robbed when they spent the day at Disneyland. However, people thought that the behavior of the police was wrong (e.g. fooling around on camera) and the way they let Austin behave, among other things, contributing to a second controversy that they had faked the robbery. Another video from Austin on Instagram upset people further, and the ACE Family denied they faked anything, and a document filed by the police was found and the burglary was proved to have happened.

In mid-2018, the ACE Family App was released and hype was built upon their main YouTube regarding the exclusive videos available to what Austin described as "real ACE family members". In October, however, it was revealed via Twitter that only those who paid a monthly subscription fee would get to view those videos. It was also pointed out about this time that many who had ordered items from the app had been charged, but had to wait months for their arrival or had not received them at all. When merchandise ran out on the channel, it was not replenished and subscribers continued to be charged resulting in many calling the app a scam. In 2019, they announced they were taking a break from YouTube to focus on their app.

In January 2019, Austin was accused of inappropriate behavior when he posted a video on Instagram of himself taking a young girl (who is not one of his children) into an alleged adult shop and buying her a phallic (the third leg) shaped lollipop. Shortly after, he deactivated his Instagram account before reactivating it a few days later with the video removed. “Guys, I’m in so much trouble,” says Austin McBroom in the video. “But she said she was gonna steal it if I didn’t buy it, so…” The child with him is not his own toddler Elle, but appears to be related to his partner, Catherine Paiz, as per BuzzFeed News. The Twitter user who found the footage, @bangtansdurag, alleges Paiz was at the store as well, though she’s not seen in the portion of the video that was uploaded to Twitter. A number of users have responded with concern for the toddler, saying what Austin did constitutes sexualizing a child.

Some Twitter users who responded to the video have noted that the shop Austin took the child into looks to be Spencer’s — a chain novelty store that, unlike many outright adult shops, does not have an age requirement for entry, but nonetheless is known for selling adult-themed products.

Another controversy arose in the same month when Catherine and Austin were accused of scamming audiences to increase subscriber numbers. They posted in a video they would give $100,000 to a member of the ACE family (typically a term used to describe subscribers to their channel) who could complete a basketball challenge and asked fans to respond if they wanted to be part of the challenge. Later that same month, however, they sent out a post saying they said selected 20 basketball players and YouTubers to compete. Ultimately, they gave the money to a wealthy basketball player, who they were friends with, but was not an official competitor or known to be a subscriber.

Austin was a former NCAA basketball guard who committed to the St. Louis University men's basketball group in Missouri. He has also participated in other sports such as baseball and soccer. In 2015, Austin began dating his spouse, Catherine, who gave birth to their first child, Elle, on May 28, 2016. They were engaged in August 2017 and were married off camera in 2019.

In October 2019, it was announced that Catherine was expecting a third child. A video titled "MOTHER AND DAUGHTER SURPRISE DADDY WITH PREGNANCY ANNOUNCEMENT!!! (SPEECHLESS)" was uploaded on February 6 and was trending on YouTube. They later announced they would be having a second daughter in a vlog of a party held by Kylie Jenner. In August 2018, fans wrongly deduced the second baby's name would be Esmeralda when it was spelled out on Elle's board. Austin and Catherine later clarified it was actually the name of their cleaner. On October 17, 2018, Catherine and Austin welcomed their second daughter, Alaia Marie McBroom.

Catherine revealed in January 2020 via Instagram that she was several months pregnant with a son but had chosen to keep the pregnancy private this time. She gave birth on June the 20th and named the child Steel Boy. A week after their son's birth they revealed a new website called the ACE Club which had exclusive content at the cost of $20 a month, however, it was unpopular for its lack of content and the videos being leaked for free on other social media sites. Due to lack of subscribers they later changed the terms of The Ace Club to cost $0.99 for the first month subscription then $20 a month for additional months. In late 2020 they stopped updating content on the ACE Club website and shut it down claiming they were scammed.

Catherine believes both in God and the power of crystals. She is an avid believer in psychics and claims when she was young one told her she would marry a sports star and have three children, the youngest of which would be a boy.