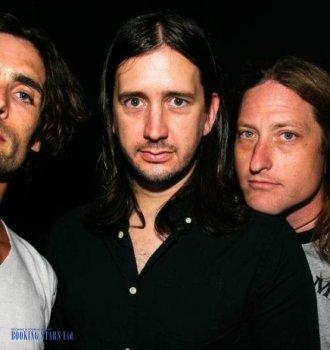 The All-American Rejects was formed in Stillwater, Oklahoma in 1999. The current lineup includes Tyson Ritter (bassist and vocalist), Nick Wheeler (guitar player and back vocalist), Mike Kennerty (rhythm guitarist and back vocalist), and Chris Gaylor (drummer). Tyson and Nick are also songwriters, while Wheeler is a composer.

The band appeared when Nick Wheeler and Tyson Ritter were still in high school. Later, when the band was on the peak of its popularity Tyson explained that there is no deep meaning in the name The All-American Rejects. It simply sounded cool at the time.

In 2000, the band released a demo album, The All-American Rejects. They got assistance from Alice Ben from Half-A-Cup Entertainment. The demo didn’t become as popular as expected, but the artists didn’t give up.

In 2001, Ritter and Wheeler released an EP, Same Girl, New Songs, which featured five tracks. Soon, it was noticed by Doghouse Records. The label offered the group a contract, and musicians readily agreed.

Soon after the first album’s release, Mike Kennerty joined the band to play rhythm guitar. Later, the members started having disagreements with the drummer. Eventually, Chris Gaylor replaced him.

The band signed a contract with DreamWorks Records and embarked on Too Bad For Hell Tour. They gave eight concerts. At the same time, they released an extended version of the debut LP. It climbed to the 25th spot of Billboard 200. At the same time, the band re-released “Swing, Swing” and “The Last Song”. The latter became popular in the UK.

In 2005, the group presented its new LP, Move Along, which made it even more popular. The album featured such hits singles as "Dirty Little Secret", "It Ends Tonight", and "Move Along". It went platinum twice. The single “Gives You Hell” is still considered the band’s best song.

At the end of 2006, the artists began working on their third LP. At the same time, they released a single “The Future Has Arrived", which was used as a soundtrack for the animated movie Meet The Robinsons.

In 2007, the band released a concert DVD Tournado, the material for which was recorded during a tour the musicians went on a year earlier.

In 2008, the group presented a new LP, When the World Comes Down. The lead single “Gives You Hell” appeared on high positions in Billboard and iTunes charts. It also came in 5th on the list of the most downloaded songs of 2009. The music video for the song appeared in November and topped VH1’s list.

In 2010, the band performed at the Olympic Games in Vancouver. After that, the musicians announced a new album. A year later, they revealed the name - Kids in the Street. Soon, the artists presented a single "Someday's Gone", which appeared on their official website for free downloading. The album itself finally came out in 2012. After its release, the band embarked on a tour, Shaking Off the Rust.

So far, the band has recorded four LP, 10 million copies of which have been sold. In 2014, the group attended Slam Dunk festival tour in the UK. In 2015, the artists performed at Mardi Gras. The same year, the band’s song “There’s A Place” appeared in the trailer to the movie, Miss You Already.

In 2017, The All-American Rejects released an EP with two tracks, "Sweat" и "Close Your Eyes". The group hasn’t revealed any information about the new LP yet, but it seems that artists are working on it.

In 2018, Tyson Ritter announced that they are reconsidering contracts with big labels in order to eliminate politics from their lyrics.