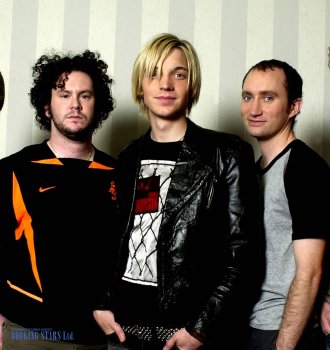 The group was formed by Alex Band and Aaron Kamin. The young men knew each other since childhood. They grew up in one neighborhood. Aaron was dating Alex’s sister. Perhaps, thanks to this relationship, the new band was formed and became popular among many alternative rock fans.

One day Aaron came to visit his girlfriend and saw Alex with a guitar in his hands. Being a guitarist himself, Aaron was surprised. He asked Alex to perform a song and really enjoyed what he heard. Soon, the young people became friends and started writing songs together.

The duo began its music career in 1996. Back then, they called themselves Generation Gap. The artists invited a saxophone player and a drummer and played jazz music. Eventually, the group fell apart, leaving Alex and Aaron alone again. However, they didn’t give up and continued recording songs after changing the name to Next Door. Alex and Aaron viewed the new name as a good sign for taking another step toward a stellar career and fame.

The duo was becoming better and better. Band’s baritone was developing and turning more and more appealing. Kamin was perfecting his guitar playing and becoming more professional every day. The two friends recorded their songs and sent discs to different studios. They kept hoping to be noticed by a serious label.

The fortunes finally turned in 1999 when they were noticed by Ron Fair. He wasn’t just a famous producer and A&R executive but also lived next door to Band. He liked what he heard on the demo record and helped the musicians sign a contract with RCA. The duo finally made it to the next level. They also changed the name to The Calling.

For the first two years of their career as The Calling, Aaron and Alex worked on the debut album, Camino Palmero. They were having a hard time due to the lack of other group members. Fair solved the problem by inviting temporary musicians to help with album recording. By 2001, The Calling wasn’t a duo anymore. They worked with Billy Mohler, Sean Woolstenhulme, and Nate Wood.

In the summer of 2001, the artists presented Camino Palmero. The fans loved their work. Many of them wanted to book The Calling for private events. The single “Wherever You Will Go”, featured in the LP, was a big hit. It reached the 5th spot on Billboard Hot 100 and climbed top spots of other world charts. The song appeared in several TV projects, including the movie Coyote Ugly, an episode of Smallville, and TV Series Cold Case. More than 5 million copies of the debut album were sold worldwide. RIAA granted it a gold certification.

In 2002, the band experienced many lineup changes, but Band and Kamin stayed with the group.

In 2003, The Calling had another unpleasant experience. The hired musicians argued that they should be getting special royalties and profits. The founders refused to pay saying that these royalties and profits were meant solely for the owners of the band, not the hired artists.

In 2004, the group released its second LP, Two. The musicians went on a long tour to support the LP. The album was slightly less popular than the debut record but appeared on many world charts. By the end of the tour, Alex and Aaron were tired of working without any support and decided to go on a hiatus.

In 2013, Alex hired new members and revived the band. However, they only performed a few times and disbanded again.

In 2016, Band made another attempt to reunite the group. In 2018, the musicians are planning to present a new LP, the exact release date and name of which are yet to be announced.