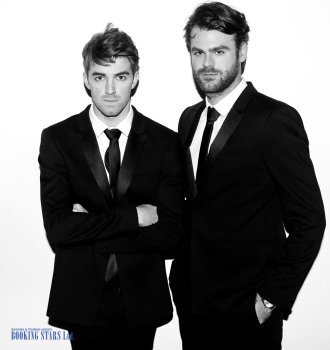 The Chainsmokers was formed in 2012. The lineup includes two DJs and producers, Alexander “Alex” Pall and Andrew Taggart. The latter joined the band at the end of the year.

A year after the formation, the duo recorded their first big hit "#SELFIE" and uploaded it to SoundCloud, Vine, And Instagram. Later the successful song was rereleased under Dim Mak Records.

In the first week after the official release, the song reached the 19th spot of Billboard Dance/Electronic Songs. A week later, it edged into Billboard Hot 100 and climbed to the 16th position. The single was popular worldwide. It entered over 20 world charts and topped some of them, including Finnish and Norwegian charts. The song reached top-5 of the charts in many European countries. The variety of platinum certificates the song collected is impressive. The sudden fame made it hard to book The Chainsmokers for any event. They were busy touring the world and recording new hits.

In August 2014, the duo presented a new single “Kanye”. In 2015, they recorded “Let You Go” together with Great Good Fine Ok. However, neither of the songs managed to repeat the success of "#SELFIE". But The Chainsmokers were far from being a one-song band.

In the spring of 2015, The Chainsmokers signed a contract with Disruptor Records and started working on the EP Bouquet. A month later, they released the first single “Good Intentions”, which didn’t make it into the charts. In June, the band presented a new song “Roses”, which became very successful. It entered twenty-two world charts, reached the 6th spot of Billboard Hot 100, and earned a bunch of platinum certifications in Australia, USA, and Canada. Another successful single from the EP “Until You Were Gone” appeared in September. It was featured in the videogame NHL 17.

Five –track EP Bouquet came out in October 2015. It climbed to the second spot of Billboard Top Dance/Electronic Albums and reached a respectable 31st position in Billboard 200. RIAA granted the album a platinum certificate for selling over 500,000 copies.

In the summer of 2016, together with Halsey, the band released a new single “Closer”. The song became the most successful work of The Chainsmokers to date. It topped a variety of charts, including Billboard Hot 100 and UK Singles Chart. It earned diamond certifications in Canada, France, and Poland. Others granted it platinum status. In 2017, the song brought the duo a Grammy nomination as "Best Pop Duo/Group Performance"

In November 2016, The Chainsmokers presented a new EP Collage. It debuted on the 6th spot of Billboard 200 and topped Top Dance/Electronic Albums. A few months later, the album earned a platinum status in the USA. The single from the EP “Don’t Let Me Down” brought the band their first Grammy.

The band’s 1st LP Memories...Do Not Open finally appeared in the spring of 2017. It immediately topped Billboard 200 and a few other world charts. By the end of the summer, it sold over one million copies in the USA.

In November 2017, the duo recorded “Sick Boy”, which was very popular in Australia. In March 2018, The Chainsmokers presented a new song “Everybody Hates Me” at their concert in Prague.