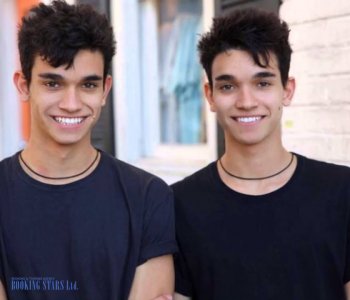 The Dobre Twins social media presence is made of brothers Lucas and Marcus. The pair are popular YouTube personalities who first rose to fame on the now-defunct video platform Vine.

They have since become popular on both YouTube and TikTok, where they have millions of subscribers who watch their comedy videos, dance videos, prank videos and more. In addition, the twins have collaborated with a number of successful colleagues, including Jake Paul. The Dobre Twins social media presence is made of brothers Lucas and Marcus Dobre-Mofid. The twins were born on January 28, 1999 in Gaithersburg, Maryland to retired Olympic gymnast Aurelia Dobre and father Boz Mofid; their parents own the Dobre Gymnastics Academy in their hometown. The twins have two older brothers, Cyrus and Darius.

As of July 2020, the Dobre Twins have more than 21.6 million YouTube subscribers, 24.4 million TikTok followers and 2 million Instagram followers.

Lucas and Marcus first started their social media career on the now-defunct video sharing app Vine. They were known as “TwinBotz” on Vine and posted videos showcasing their gymnastics skills, breakdancing, and more. The twins gained nearly 2 million followers on Vine before the app was shut down.

Lucas and Marcus launched their successful YouTube channel in 2015, and they post a huge variety of videos, including comedy sketches, pranks, gymnastics skills, challenges, vlogs and more. Their popular video “Gymnastics in Grocery Store!” has been viewed millions of times.

While they were on Vine, Lucas and Marcus started collaborating with Vine star Jake Paul, and later became part of his original Team 10 collaborative house in Los Angeles, which helped grow their YouTube following significantly. They twins later left the Team 10 house.

In addition to their social media accounts, the Dobre twins have branched out to more traditional forms of media. They appeared on Disney Channel’s “Bizaardvark.”

The twins partnered with AT&T for their Later Haters campaign. The campaign across social media encouraged people to use positive messages online and stand up to bullying. Later, they participated in We Day at The Theater at Madison Square Garden, a touring event that hoped to inspire teens to make a positive difference in their community.

The Dobre brothers have released several songs as well: “You Know You Lit” and “Bumpin.”

In 2018, all four Dobre brothers signed with Creative Artists Agency, or CAA.

The twins have been nominated for several awards as well. In 2018, they were nominated for the Muser of the Year at the Shorty Awards and for the Breakout Creator award at the Streamy Awards. They did not win either award.

The Dobre twins have faced some controversy. In 2020, they came under fire for pulling a prank on friends where they pretended to fall asleep at the wheel of Tesla. The car had been put on autopilot. The twins came under fire because the Tesla Autopilot feature still requires the driver to be awake while the car is driving.