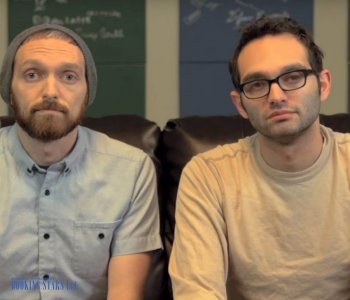 Rafi and Benny Fine, popular as the “Fine Brothers” on YouTube, are online writers, directors, editors and content producers. They are famous for their ‘Spoiler series’, ‘Reactseries’ and narrative video series. Their ‘Kids React’ Series won the ‘Best Viral Video Series’ at the 39th Daytime Emmy Awards in 2012 and ‘Best Variety Web Series’, ‘Best Non Fiction or Reality Series’ awards at the IAWTV Awards in 2012, 2013 and 2014 respectively. The Fine Brothers are creators of the first ever web- trans-media mockumentary sitcom MyMusic made for the ‘MyMusicShow’ YouTube channel. It is funded by YouTube and the character ‘Metal’ played by Jarrett Sleeper is based on their teenage life. MyMusic has over 3.8 million subscribers. The first episode of the show was telecast on 15th April, 2011. The response to the first season was so overwhelming that they went on to produce the second series under their production company “Fine Brothers Entertainment”. MyMusic received three IAWTV Awards nominations and five Streamy Awards nominations in 2013. Their works have featured in websites of Time Magazine, Variety, MSNBC and The Wall Street Journal.

The Fine Brothers made a live action feature in 2000 and it got screened in many comedy film festivals. They went on to receive the‘Young Film- Maker Award’, but soon understood that internet had more scope for their prosperity rather than trying for a Hollywood break.
Recommended Lists:American Comedy YouTubers
The Fine Brothers uploaded their first web video in 2004 and posted live action sketch and comedy features on websites like MySpace. On 4th June 2007, they created their main YouTube channel, ‘The Fine Bros’ which is called FBE at present. Their initial videos were of mature social satirical genre. Later, they launched a second channel on 14th May, 2009, ‘TheFineBros2’ and a third channel ‘React’ on 22nd July, 2014. At present the FBE performs as a fully developed studio, network and media company which produces 10 serialized shows weekly for YouTube, television and digital platforms. The channel produces scripted, animated, sketch, non-scripted, interactive and ‘React’ video contents.
The FBE has more than 15 million subscribers and has an estimated net worth of $10 million as on 11thFebruary, 2017.
‘The FBE2’ channel has around 0.7 million subscribers. In FBE2, videos like ‘BEHIND THE VOICES – R RATED FROZEN’ and ‘BEHIND THE VOICES’, they have shown the voice over recording sessions simultaneously with the corresponding animation videos.
The Fine Brothers broadcast clipsfrom their news ‘All We Know’ podcasts and behind- the- scenes clips onFineBros2. The ‘React’ channelhosts shows of popular stars (adults, kids, elders and teens) of the previous React videos. They uploaded the first episode of the ‘Kids React’ on their YouTube channel on 16th October, 2010.Later they uploaded ‘React’ videos of other YouTubers and celebs. Some of these videos are‘Kids React to Viral Videos#1(Double Rainbow, Obama Fail, Twin Rabbits, Snickers Halloween)’, ‘Kids React to Harry Potter and the Deathly Hallows Part 2 Trailer’, ‘ College Kids React to

Fantastic Beasts Trailer (Harry Potter Wizarding World)’ and‘Elders React To Andy’s Coming Challenge’.The Fine Brothers in collaboration with actor, television and radio personality Nick Cannon aired the television series titled ‘React to That’ on Nickelodeon on 15thDecember, 2014. This reality show showcased opinions of people of all age groups on viral YouTube videos and had sections like ‘Finish the Story’, ‘Challenge’, ‘Which is…?’, ‘Don’t Smile Challenge’, ‘Real or Fake’, ‘Remix’ and ‘What Was Your Favourite’. They created and hosted a TV comedy reality show, ‘Six Degrees of Everything’ with Marc Summers Productions which was telecast in 18th August, 2015 on TruTV. They produced the ‘Superfan Suite: PLL’ episode of the hit show ‘Pretty Little Liars’ for ABC which was aired on 11th August, 2015. The brothers have collaborated with other YouTube celebrities like ShayCarl, Shane Dawson, PewDiePie and KassemG and top channels like Smosh in writing, directing and producing webvideos.Later, they added videos of members of the cast reacting to video games on their ‘React’ channel. The ads on their popular interactive videos on YouTubeadd a lot totheir total revenues.The FBE have also been sponsored by Comedy Central and Ford. The Fine Brothers have created and produced the web series ‘SING IT’, a satirical lookout on singing competitions with Mandeville Filmsand it debuted at YouTube Red on 25th May, 2016.
You May Like
The Most Cruel Rulers In HistoryThe Most Cruel Rulers In HistoryWho Is The Greatest Female Warrior In History?Who Is The Greatest Female Warrior In History?The Sexiest Men Of 2020, RankedThe Sexiest Men Of 2020, RankedThe Best Black Actresses Of All TimeThe Best Black Actresses Of All Time They are popular for their ‘Spoiler’ YouTube uploads where they spoil a plethora of topics varying from films, video games and books. Some of the popular videos are ‘Spoiler series, 100 Movie Spoilers in 5 Minutes - (Movie Endings Ruined)’, ‘Spoiler series, Doctor Who in 6 minutes’, ‘Spoilers of first 7 Harry Potter films’.

Their show titled “Lost- What Will Happen Next” amassed a lot of viewers and it hadmore than 19 episodes. It became the longest running show on the FBE Channel and ended on 1st November, 2010. This series, featuring fictional characters from ‘Star Wars’ and‘Avatar’, was predominantly a parody of the ‘Lost’ television series.
ControversiesThe Fine Brothers announced a licensing system called ‘React World’, where the fans would be able to create their own reaction videos. Those having the license would get creative and production guidance including authority to use relevant assets, format structures and graphics developed by the Brothers in return for a share of the revenue generated. Thus, they were trying to trademark the word ‘React’. This led to backlashes by other YouTubers and fans who thought that the Fine Brothers were trying to restrict those not affiliated to them from creating their ‘React’ videos. Further, those under their licensing system would be forced to pay 30% license fee for using the word ‘React’ in their videos. The number of subscribers to FBE channel sharply decreased due to this announcement and hence they discontinued with the program. Benny Fine was born on 19th March, 1981 and Rafi Fine on 9th June, 1983 in Brooklyn to Jewish parents Yehuda Fine and Ellie J. Fine. Their father is a writer, speaker and educator who acted in many of their React videos like “Elders React to Ghost Elevator Prank”. Their mother is a Democrat. Benny and Rafi are both graduates. Rafi, who has a degree in film studies, initially attended Dickson College and was later transferred to Hunter College. They have an elder sister named Dorah Fine who is a Voice Actor and Hebrew and Judaic Studies Teacher.
In his pre-adolescence age, Benny would record interviews of people in his Jewish community on tape recorder (later he used the family camcorder) and soon Rafi followed Benny in shooting such videos. By the time they had graduated, they had made a handful of short length features starring action figures of ‘Thundercats’ and ‘Star Wars’ and showed them to family and friends. They recorded their reactions which were their first version of ‘React’ videos.