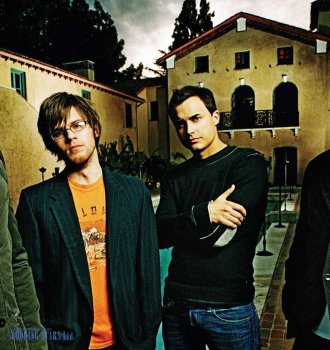 The Fray appeared in Denver, Colorado in 2002. Four talented musicians released several famous albums, earned a big number of awards, and conquered the hearts of fans all over the world.

The initial lineup consisted of Isaac Slade (vocalist, guitarist) and Joe King (vocalist, guitarist). At first, artists performed in the local clubs as a duo. Later, Zack Johnson and Caleb Slade (Isaac’s brother) joined them. The lineup changed several times in the past 16 years. Today, besides Isaac and Joe, it features Dave Welsh (guitarist and bass guitarist) and Ben Wysocki (drummer and percussionist).

The band’s name appeared thanks to the members’ habit to quarrel over the lyrics and music. That’s how the word “fray” came about and stuck.

The musicians acquired numerous fans, who told others about the talented group from Denver. The Fray won a “Best New Band” award from the local Westword Magazine. Their songs started appearing on local radio stations.

In 2004, the artists signed a contract with Epic Records. Their first single "Over My Head (Cable Car)" came out in 2005 and turned into a hit. It reached the 8th spot on Billboard Hot 100 and earned four platinum certifications from RIAA. The group became very popular. Many fans wanted to book The Fray for their events, but they were busy recording new masterpieces.

In August 2005, The Fray released its debut studio LP, How to Save a Life. It became the most commercially successful album in the band’s history. The LP reached the 14th spot on Billboard 200 and the 4th position on UK Albums Chart. It brought the band international recognition. The album appeared on the charts of many countries. Over 2.3 million copies were sold in the USA. Many more millions went on sale in Canada, the UK, Australia, and New Zealand, where the LP received platinum certifications.

One of the singles featured in the LP, "How to Save a Life”, became a huge hit. It reached high spots on the charts and earned a platinum status in the USA. The album brought The Fray’s fans two more hits, “Look After You” and “All At Once”.

In 2009, the band recorded its second album, The Fray. It immediately topped Billboard Hot 100 and sold almost 900,000 copies in the USA. Several countries granted the album a platinum status. The LP featured a hit single “You Found Me”, which earned four platinum certifications from RIAA and two from ARIA. A less popular single, “Never Say Never”, appeared in the TV series, The Vampire Diaries.

The band’s third album, Scars & Stories, came out in 2012. It was much less successful than the band’s previous LPs. It reached the fourth position of Billboard 200 and the 44th spot on UK Albums Chart. The single “Heartbeat” earned a gold status from RIAA.

In 2014, the musicians presented the fourth LP, Helios. Even though it appeared in several world charts, its popularity wasn’t what the band members expected. None of the singles made it into Billboard Hot 100.

In 2016, the group recorded a compilation album, Through the Years: The Best of the Fray. It climbed to the 77th spot on Billboard 200.

The musicians are working on new songs and performing live.