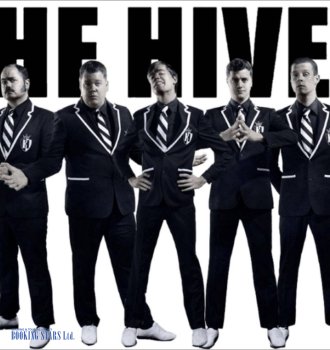 The Hives – Rock band from Sweden.

The Hives was created in 1993 by Randy Fitzsimmons. The band came up with a signature image. At their live concerts, all the members wear black and white suits, the style of which changes every time a new album comes out.

In 1994, the band released a demo EP, Sounds Like Sushi. It was successful and brought the members a contract with Swedish recording studio Burning Heart.

In 1996, the band recorded its first official EP, Oh Lord! When? How?, A year later, they released the 1st studio album, Barely Legal. Most of the songs for the LP were written by Randy Fitzsimmons. The album came out in September 1997. After the release, the band went on its first tour.

The song "A.K.A. I-D-I-O-T" was initially released as the second track from the debut album. However, in 1998, it was featured in the EP with the same name. The same year, The Hives released a double EP, A Killer Among Us, under the label Hard-On Records.

In 2000, the group recorded its 2nd studio LP, Veni Vidi Vicious. The album reached the 50th spot on the Swedish chart. Later, when the album was re-released in 2002, it entered Billboard 200 and settled on the 63rd position. The LP earned a gold status in Sweden.

Initially, the first single from the second LP, "Hate to Say I Told You So", wasn’t successful. However, after the album came out in the USA, the song blasted into the world charts. In the USA, it entered Billboard Hot 100 on the 86th position and reached the 6th spot on Billboard Modern Rock Tracks. The UK Singles Chart granted the song the 23rd spot. It was also very successful in the Netherlands and Australia. Later, the song earned a silver status in the UK after selling over 200,000 copies. The Pitchfork magazine put "Hate to Say I Told You So" on its 500 Greatest Songs list. The song got the 244th position and became the band’s most popular track.

In 2001, the band released a compilation album, which featured its early songs, Your New Favourite Band.

In 2003, The Hives earned prizes at NME Awards for "Best International Band" and "Best Dressed Band". Back then, it was nearly impossible to book The Hives for any event due to their impressive popularity.

After touring the country, The Hives came back to the studio and created their 3rd LP, Tyrannosaurus Hives. It was released in July 2005 under Interscope. The LP topped the Swedish Albums Chart and got high spots in the UK and Finland. Billboard 200 gave it the 33rd position.

In Sweden and Finland, the LP earned gold statuses. The lead single from the album, "Walk Idiot Walk", also reached high spots on the world charts. On the Swedish Singles Chart, it settled on the 15th position. Even though the song wasn’t as popular as "Hate to Say I Told You So", it climbed to higher spots on the charts.

In 2005, the band received four Swedish Grammis Awards. The music video for the song "Walk Idiot Walk" brought it the MTV award for "Best Music Video".

In 2007, the band released its fourth LP, The Black and White Album. It reached the 3rd spot on Swedish Albums Chart and the 65th position on Billboard 200.

In 2008, The Hives earned another Swedish Grammis Award as "Best Live Act."

In June 2012, the band presented its new album, Lex Hives. The album climbed to the 7th spot of Swedish Albums chart and the 84th spot on Billboard 200. This was the band’s last album to date.

In 2015, The Hives released a non-album single, "Blood Red Moon". They continue working on their music and performing live.

How much does it cost to book The Hives:
Price inquiry
The Hives booking agent:
Contact agent
The Hives Contacts:
Send The Hives a message
« previous next »