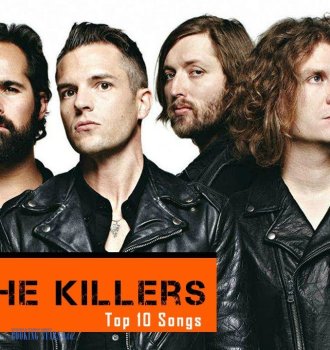 The rock band The Killers was formed in Nevada, in 2001. The current lineup includes Brandon Flowers, Dave Keuning, Mark Stoermer, and Ronnie Vannucci Jr. The band is particularly famous for such songs as “Mr. Brightside”, “Somebody Told Me”, “Human”, and “When You Were Young”.

The story of the band’s name deserves a special attention. The group members decided to adopt the name of the band featured in the famous music video of New Order “Crystal”. Before taking the name, the band had many different options and couldn’t agree on one.

Before forming the group, the members mastered a variety of professions. For example, the vocalist Brandon worked in a hotel. Dave came to LA from Iowa after quitting school. For some time, he worked as a store clerk in Banana Republic but soon realized that he didn’t like it. Stoermer used to be a delivery boy while studying philosophy in college. Vannucci attended the same college but learned how to be a drummer. In his free time, Ronnie worked for a bike taxi and as a photographer.

Flowers used to play with the band Blush Response but didn’t want to move to LA with them. After the band left, Flowers met Keuning. The Killers were formed some time after their friendship began. At first the bass guitarist was Keuning’s neighbor, however, they didn’t work well together and started looking for new members. Bass guitarist and drummer Stroemer and Vannucci worked with other bands and didn’t want to leave them for inexperienced Keuning and Flowers. However, they eventually became friends and came to create The Killers.

The Killers started their career playing at the local nightclubs. Eventually, they were noticed by several producers and agents. Even though they didn’t end up signing a deal with Warner Bros, its representative took one of the band’s records to the UK, where he showed it to one of the labels. This resulted in the band’s going to England and signing a contract with Lizard King Records.

In 2004, the band released their debut LP Hot Fuss, which became an immediate hit, getting high spots on the charts and receiving a variety of platinum certifications. Their next three LPs were just as successful. The Killers continue to record new songs and perform live.

How much does it cost to book The Killers:
Price inquiry
The Killers booking agent:
Contact agent
The Killers Contacts:
Send The Killers a message
« previous next »