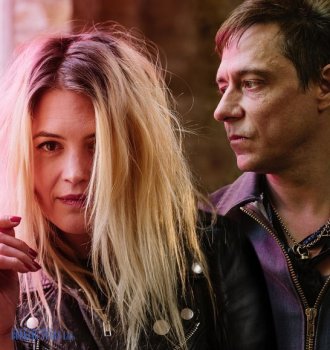 Alison Mosshart from the USA and Jamie Hince from the UK formed the British-American duo The Kills in 2001. Before creating the band, Alison worked with the punk rock group Discount. The musicians met in the hotel. Mosshart heard Hince playing the guitar in the neighboring room. Hince worked with such bands as Blyth Power and Scarfo.

After meeting in the hotel, Jamie and Alison became friends. They exchanged ideas and sent records to each other. Those were the first drafts of their future work. When Mosshart’s and Hince’s bands fell apart, the musicians decided to form their own duo. They called the project The Kills. The year of the band formation is officially 2001, which is the time when Mosshart moved to London.

The duo’s first release was an EP, Black Rooster, which the artists recorded with an indie label Domino Records. In the USA, the EP was released with the assistance of Dim Mal Records. The album’s cover featured photo booth pictures of Alison and Jamie. The songs were a mix of rock and blues.

In the interviews, the artists said that they were inspired by such musicians as Captain Beefheart, PJ Harvey, Patti Smith, The Velvet Underground, and others. Many critics compared the band to The White Stripes. The comparison became even more popular when the band recorded its debut album, Keep On Your Mean Sid, in the Toe Rag Studio. That’s where The White Stripes created their hit LP, Elephant.

Initially, The Kills marketed their work as something different from everything else in the music industry. The musicians rarely gave interviews. However, they invited the media to their private concerts. On stage, The Kills always looked unusual. When Mosshart wasn’t singing, she was smoking a cigarette and talking to the audience. Meanwhile, Jamie was playing his guitar and occasionally singing along.

In 2005, The Kills released a new album, No Wow, which had fewer heavy guitar melodies than the previous one. The duo decided to turn to a softer and more artistic manner. The lead single from the album, “The Good Ones” appeared in February and immediately reached the 23rd position on the British charts. After that, a documentary about the group’s work came out on DVD. At that time, many organizers wanted to book The Kills for private events.

Midnight Boom was the group’s second LP. It came out in 2008. The songs from the album appeared on many TV shows in the United States. It featured such hits as "U.R.A. Fever", "Cheap and Cheerful", "Getting Down”, and others.

In the fall of 2009, on MySpace, The Kills announced working on its 4th LP. The release date was a secret for a long time. Eventually, the album appeared in April 2011. The duo called it Blood Pressures. A few months earlier, the musicians presented a music video for the first single “Satellite”. Later, they recorded successful music videos for "Future Starts Slow" and "Baby Says". Again, the songs from the album appeared in movies and TV series.

In 2012, the artists presented a photo book Dream&Drive, on which they worked with a famous photographer Kenneth Capello.

At the end of 2013, The Kills were planning to go on a joint USA tour with Queens of the Stone Age. However, Hince hurt his hand closing the car door. The injury kept him from playing the guitar. The musician underwent several surgeries. As a result, Jamie had to change his approach to playing.

In one of the interviews in 2014, Mosshart said that the next album would be completely different from the others. The fifth LP came out in 2016 under the name of Ash & Ice. It was very successful, reaching the 14th spot of the UK Albums Chart. The album featured such hits as "Doing It to Death", "Heart of a Dog", and "Hard Habit to Break".

After the release of the LP, The Kills embarked on a long tour, which had to be suspended due to Alison’s pneumonia. In 2017, the duo performed with Guns N 'Roses on their world tour.