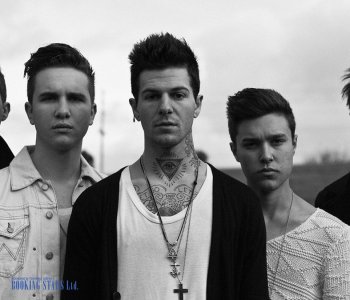 The band's second album, "Wiped Out!", Was released in October 2015. They recorded two mini-albums: in September 2017, the mini-album "Hard", which quickly hit the Billboard 200 charts, and in January 2018, the mini-album "To Imagine".

Below we will tell you in more detail about the main stages in the life of the group.

The band chose the British spelling of the word "neighborhood" for their name on the advice of their manager - to avoid confusion with the then existing American band of the same name.

In early 2012, The Neighborhood got together and recorded Female Robbery and Sweater Weather. In May 2012, the band announced a self-recorded free-distribution mini-album called "I'm Sorry ....". The debut album was produced by Justin Pilbrow. In December 2012, the band's second mini-album entitled "Thank You" was released. It includes the songs "Let It Go" and "A Little Death".

Album "I Love You" was released on April 23, 2013 and debuted at number 39 on the Billboard 200 Albums Chart. On July 27, 2013, the band played the lead single from the album "Sweater Weather" on Jimmy Kimmel's American late night talk show. "Sweater Weather" topped the charts in early June 2013, peaking at No. 1 on the Billboard Alternative Chart and entering the Top 10 on Billboard Heatseekers. Rolling Stone magazine welcomed the world premiere of "I Love You" on April 16, calling the album "fluid" and "atmospheric."

The video for the first official single "Sweater Weather" from the album "I Love You" was released on March 5, 2013. The group is known for using black and white imagery in their music, illustrations and videos.

The album "The Love Collection" includes three songs: "West Coast", "No Gray" and "Sting". Each of them came out on 7-inch vinyl records.

On January 16, 2014, the band members announced on social media that drummer Brian Sammis was leaving the group.

The fans, combining both parts together, immediately realized that the musicians were trying to present them with a full-length album (LP) "Hard to Imagine" and convey a message about the upcoming, and possibly already occurred changes in the group. After the release of the video (mini film "Hard to imagine"), the last doubts about this were dispelled.

Closer to the release of their debut album, I Love You, The Neighborhood performed at the 2013 Coachella Music Festival.

In March 2013, The Neighborhood performed the song "Afraid" at the SXSW festival sponsored by the Live Nation.

On April 23rd, The Neighborhood announced a 2013 summer tour called The Love Collection Tour, which also featured Lovelife, the 1975 and singer JMSN.

On May 18, 2013, The Neighborhood performed at the KROQ Weenie Roast annual music festival.

On May 30, 2013, they announced that they would be touring with Imagine Dragons in July and September 2013.

In the summer of 2013, "The Neighborhood" visited eastern Canada twice. On July 21, 2013, they became one of the headliners of the Edgefest in Toronto, and a few days later, on August 4, they performed at the largest Canadian music festival, Osheaga in Montreal.

On September 21, 2013, The Neighborhood performed at the Music Midtown Festival in Atlanta. On July 27, 2013, they performed their lead single, "Sweater Weather," in black and white, on Jimmy Kimmel's talk show. A press release dated November 15, 2013 announced that The Neighborhood will be participating in the CBS Interactive award-winning Live on Letterman web concert series hosted by AT&T.

The performance was supposed to take place on November 19, 2013 in black and white. On December 8, 2013, they opened the "Not So Silent Night" event, which featured performances by Bastille, Arcade Fire, Alt-J, Phoenix and Lorde. Then, just two days later, on December 10, their new track, Silver, premiered on BBC Radio 1. They also announced a new project, "# 000000 & #FFFFFF", due out in 2014. In January, the band announced a tour called "Le Tour Noir", which will take most of March 2014. Also in January, The Neighborhood took part in the CBS Grammy Gig of a Lifetime competition held in Los Angeles at the Club Nokia. Country singer Barrett Baber acted as opening act for them.

Vocalist Jesse Rutherford retweeted that the band will play at the SXSW Festival on March 12, 2014 at the Palm Door on Sixth in Austin, Texas. The festival will also take part in the group "Woman's Hour", "RÁJ" and others, and the group "The Neighborhood" will act as the headliner.

In late April / May 2014 The Neighborhood was on a European tour. They performed in various venues including Paris, Lisbon, Liverpool, London, Brighton, Amsterdam, Moscow, Warsaw and finished the tour on May 17 in Krakow at the Czyżynalia 2014 festival.

On June 22, 2015, it was announced that the band would be taking part in a tour called The Flood Tour in the fall of 2015 with the bands Hunny and Bad Suns.

On December 9, 2015, the band performed in Texas at the How the Edge Stole Christmas concert alongside five other bands: Atlas Genius, The Struts, Panic! at the Disco ”,“ Sublime with Rome ”, and“ Of Monsters and Men ”.