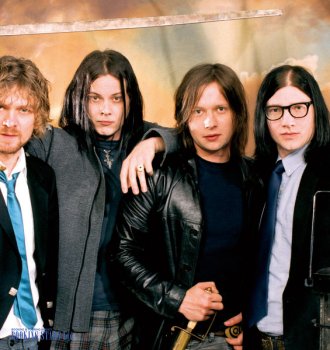 The members of the rock group The Raconteurs, Jack White, Brendan Benson, Patrick Keeler, and Jack Lawrence, knew each other since 1998. However, they worked on different projects. In 2003, the artists helped a famous country singer Loretta Lynn record her album, Van Lear Rose. One of the tracks, featured in the album, “Portland, Oregon”, was performed by White and Lynn. The album was impressively successful. It earned a Grammy Award for Best Country Album. The single “Portland, Oregon” got a Grammy for Best Country Collaboration.

In the summer of 2005, Brendan wrote music and played it for Jack White, saying that all it lacked was lyrics. Jack liked the music and immediately wrote the text. Their first song was called “Steady, As She Goes”. Then the artists wrote another one, “Broken Boy Soldier”. The two musicians decided to form a band. They asked Keeler and Lawrence to join them. The new team decided to call itself The Raconteurs, which in French means “good storytellers”. The band immediately started working on an album at Benson’s home studio in Detroit.

In January 2006, The Raconteurs officially presented its debut single “Steady, As She Goes”, which topped Alternative Songs Chart, came in second on Adult Alternative Songs Chart and settled on the 54th position of Billboard Hot 100. The single was also popular in Canada and the UK, reaching high spots on the charts. The Rolling Stone magazine called the song the second best single of 2006. In March, the band went to tour the UK. In April, it gave concerts in the USA. At that time, many organizers tried to book The Raconteurs for private events.

In May 2006, the group presented its debut LP, Broken Boy Soldiers, which had an impressive success and exceeded the artists’ expectations. It came in 2nd on the UK Albums Chart and reached the 7th position of Billboard 200. In December 2006, the British magazine, Mojo, called Broken Boy Soldiers the best album of the year.

In July 2006, the band released a new single “Hands”, which came in 15th on Canadian Singles Chart and settled on the 29th spot of the UK Singles Chart. In 2007, the musicians presented the 4th single from their debut album “Level”, which came in 7th on Alternative Songs Chart. In July, the British label EMI released a compilation album The Saturday Sessions: The Dermot O'Leary Show, which featured The Raconteurs’ single “Steady, As She Goes”.

In February and March 2008, the group worked in Nashville on the next LP, Consolers of the Lonely. In order to see how their work fares among the fans, the artists released the album three weeks after the recording without doing any promotional work. The LP debuted on the 7th spot of Billboard 200 and came in 8th on the UK Albums Chart.

In the first week after the release, the album sold over 42,000 copies. The LP made it into numerous “best album” lists of such magazines as Rolling Stone, Spin Magazine, and Glide Magazine. In February 2009, it won a prize at Grammy Awards for Best Engineered Album, Non-Classical.

In March 2008, the artists presented the first single from their second LP, “Salute Your Solution”. It reached high spots on the US rock charts. The single settled on the 42nd position of the Rolling Stone magazine’s list of 100 best songs of 2008. In August, the band released another single “Many Shades of Black”, which reached the 37th spot of Hot Modern Rock Tracks Chart. Before the year was over, the group presented one more popular single “Old Enough”.

At the beginning of the 2010s, all group members were busy with other projects. They rarely gave concerts and eventually went on a hiatus. Four years later, the team got back together and announced the release of their next album.

In December 2018, the artists presented a promotional single “Sunday Driver”, which reached the 28th spot of Adult Alternative Songs Chart. The release date and the name of the upcoming album, which is due out in 2019, haven’t been announced yet.