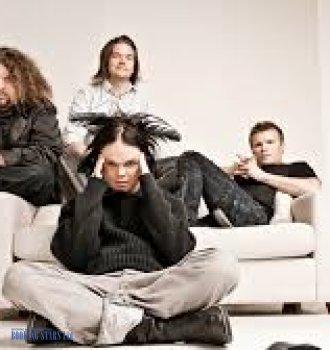 The Rasmus is a boy band formed in 1994. Its founders Eero Heinonen, Lauri Ylönen, and Pauli Rantasalmi met in high school. They decided to name the band The Rasmus, even though other names such as Anttila, Trash-mosh, and Sputnik were contemplated.

In 1994, the band performed on stage for the first time. They played their music at a party in high school they all attended. After the performance, a trio turned into a quartet. Jarno Lahti became the fourth member of the band.

In 1995, the young men met with a manager, who agreed to promote the band. They released the first demo album 1st in December 1995. It featured four songs, which were enough to catch the attention of a famous Finish label Warner Music. They offered The Rasmus a contract. The band went on to record songs, “2nd” and “3rd”. The singles made the group very popular, especially among fans of pop and gothic rock.

In 1996, the band recorded its first studio LP, Peep. To support the album, the musicians went to tour Estonia and Russia. Back then, they were just 16 years old.

After the tour, the artists started working on a new LP. They released three promotional singles, “Playboys”, “Blue”, and “Kola”. The first one had the same name as the album, which was released in August 1997. The musicians became very popular and earned an EMMA, which is the Finnish Grammy award. Their concert at a Helsinki stadium attracted more than 40,000 fans from all over the world. At that time, many organizers tried to book The Rasmus for private events.

In 1998, the band released their second studio LP, Hell of a Tester. The single, “Liquid”, became more popular than the album. Many critics called it the best Finish rock song of the year. The LP climbed the 16th spot of the Official Finish Charts.

Then the musicians took a break from recording albums for three years. During that time, they released a single “Swimming With The Kids’, which became part of the previous LP. They worked hard to hone their performance skills. The band performed with such groups as Red Hot Chili Peppers and Garbage, which visited Finland as part of their world tours. In 1999, the group gave over 80 concerts. At that time, Janne Heiskanen, who replaced Jarno Lahti back in 1995, left the band. His place was taken by Aki Hakala.

To support their next album, the musicians presented promotional singles “Madness” and “F-F-F-Falling”. In 2001, they finally released the next LP, Into with the label Playground Music Scandinavia. The album topped the Official Finish Charts and became platinum. Thanks to the LP, The Rasmus earned another EMMA award.

In 2003, the group presented one more LP, Dead Letters. It became one of the most commercially successful albums in the band’s history. It climbed to high spots on Finnish, German, Swiss, and Austrian charts. The band earned a prize at MTV Europe Music Awards.

After touring Japan, in 2005, the musicians recorded one more album, Hide From The Sun. Right after the release, they went on a promotion tour to Europe and America.

In 2008, The Rasmus released, Black Roses. It was especially popular for the single “Living In A World Without You”. The album topped the national chart.

In 2012, the album The Rasmus came out. It earned a gold certification in Finland.

In 2017, the group released Dark Matters, which featured 10 singles. The song “Paradise” became a hit.

The band continues working on new songs and performs live.