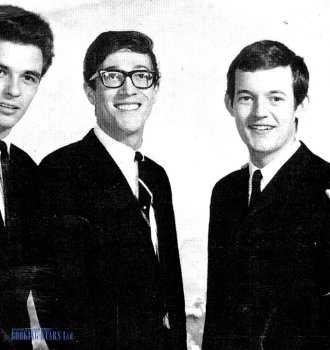 "The Shadows" (the first names were "The five Chesternuts", "The Drifters") are a music band from Great Britain which was founded in 1958. This instrumental rock band became a path-breaker of the four-member instrumental concept, which included bass-, lead-, rhythm-guitars and drums, of course. Later they decided to add keyed. The band's members changed several times.
Their music approach is unique - it is a mix of different styles - rock, pop and even ballads with a little bit of jazz. Moreover, the musicians experimented with music styles - they launched their disco track "Don't cry for me Argentina" in the late 70s, and the audience liked it.
The band's debut album was released in 1961 and it was called "The Shadows". They tried to use the name of their band in the names of their albums: "Dance with the Shadows", "Out of the Shadows" etc.
In 1975 "The Shadows" were voted by the public to go to Stockholm to participate in Eurovision Song Contest with their "Let me be the one" song. The band finished in the second place with 138 votes. "Let me be the one" held the highest positions on different world music charts, and the band received international success.
"Foot Tapper", "Wonderful Land", "Apache", "Dance On" are the most popular and famous songs by "The Shadows", which gave them an international acclaim. The songs of "The Shadows" are available to download on different apps and sites.
The group disbanded twice, but they are still together. In 2009 they launched a fresh album on the market. "The Shadows" have been touring and don't want to stop. It is interesting to note, that some people claim "The Shadows" are the oldest rock band in the world which still exists. It is little wonder that they are thought to be one of the most popular rock-bands in the world.
Book The Shadows