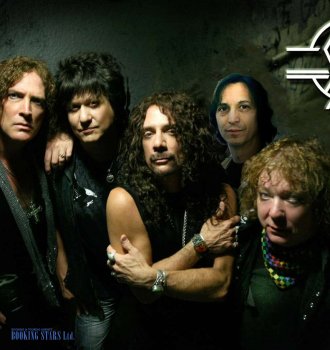 The Sweet is a British glam rock band, which was established in London, in 1968. The band was especially popular in the 1970s. Sweet is mostly known for its hits “Funny Funny”, “Block Buster!”, and “Little Willy”.

In 1968, ex-members of Wainwright’s Gentlemen group Brian Connolly and Mick Tucker created a band called The Sweetshop. They invited Steve Priest and Andy Scott (later) as guitarists. The same year, the band signed a contract with Fontana label and recorded a single Slow Motion/It's Lonely Out There. The single failed and the contract with Fontana was terminated. Sweet went on to record three more singles "All You'll Ever Get From Me", and "Get On The Line". All of them fail.

In 1969, the band’s producer Phil Waiman hired songwriters Nicky Chinn and Mike Chapman, who were not yet famous. The band signed a contract with RCA records and started recording bubble gum pop songs.

In 1971, their record their first hit “Funny Funny”, which made it to the 13th spot on the British Single Charts. The next song “Co-Co” got as high as the second spot. The same year, the band released their first album Sweet, which contained the previously recorded singles. Their second album “Sweet’s Biggest Hits” was similar.

In 1972, the bubblegum pop’s popularity was starting to wane and the band decided to record their hard rock songs on the same disks as Chinn & Chapman hits. The same year, the band released their first glam rock single “Wig Wam Bam” and got to the 4th spot of the British chart.

In 1973, the released a single “Blockbuster’, which topped the UK Singles Chart. They went on to record such glam rock hits as "Hell Raiser", "Ballroom Blitz", "Teenage Rampage", "Rock & Rolle Disgrace" and "Need A Lot Of Loving".

In 1976, Sweet released Give Us a Wink, the style of which was closer to hard rock than glam rock. The album didn’t make the charts. The Sweet decided to go back to pop music, signed a contract with Polidor Records and released "Love Is Like Oxygen", The single go to the top-10 of various European chart. LP Level Headed (1978) was the last popular album recorded by the band. In 1982, Sweet were disbanded. The new version of the Sweet was established in 1985 by Brian Connolly, however, it never managed to reach the same popularity levels.

Sweet is an excellent choice for any event.

How much does it cost to book The Sweet:
Price inquiry
The Sweet booking agent:
Contact agent
The Sweet Contacts:
Send The Sweet a message
« previous next »