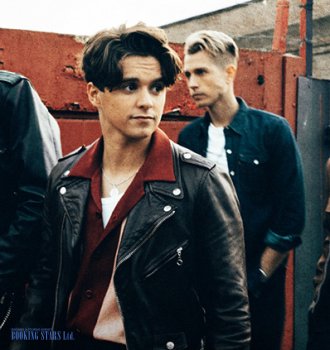 The Vamps were founded in 2012. The lineup includes Bradley Will "Brad" Simpson, James Daniel McVey, Connor Samuel John Ball, and Tristan Oliver Vance Evans. All musicians except one were born in England. The bass guitarist Connor Ball is from Scotland. All The Vamps members were born in the mid -1990’s.

The band began its way to success by recording cover versions of popular songs and uploading them to the internet. Thanks to a formidable number of views, attention from the fans, and a great personal charm, the group was noticed by the representatives of the Mercury label. Shortly, they signed a contract. At about the same time, The Vamps got a chance to work with a famous band One Direction. They performed "Live While We're Young" together. Critics often compare the two bands, noting style similarities.

In 2013, The Vamps released a debut single “Can We Dance”. The single climbed to the 2nd spot of the UK Singles Chart and earned a platinum certification in Australia. The next single “Wildheart” came out in July. The music video collected over 45 thousand views on YouTube.

In 2014, the band presented its debut LP, Meet the Vamps, recorded with Mercury Records. The album featured such songs as "Wild Heart", "Can We Dance", "Last Night", "Somebody to You", "Oh Cecilia (Breaking My Heart)", which brought it formidable popularity. Its success was impressive. It reached the top-5 in the charts of Australia, Ireland, the UK, and Scotland. The album made it into Billboard 200 and settled on the 40th position. It became platinum in the UK. At that time, many fans tried to book The Vamps for their private events.

In 2015, the boy band recorded one more LP, Wake Up. This time they worked with Steady Records. That year they changed several labels, including Universal Music and EMI Records. After the LP came out, the musicians went on a support tour called Wake Up World Tour. They visited several UK cities. The album featured such hits as "Rest Your Love", "Volcano", "Stolen Moments", "I Found a Girl", and "Wake Up". It climbed the 10th spot of the UK Albums Chart and appeared in the charts of the USA, Span, Scotland, Australia, Ireland, Belgium, and Denmark. In the UK, the album earned a silver status.

Two years later, the band presented its third album, Night & Day (Night Edition). In 2016, they released two promotional singles, "All Night" and "Middle of the Night". Both of them became hits. The album featured such guests as DJ Matoma, DJ Martin, DJ Mike Perry, and Sabrina Carpenter. It topped weekly UK and Scottish Charts. It also made its way into other charts, including New Zealand, Italy, and Japan.

In 2018, the Vamps presented the new edition of Night & Day called Day Edition. It featured such popular songs as "Just My Type", "Too Good to Be True", "Hair Too Long", "For You", and "What Your Father Says. The album climbed the 11th spot on the Irish Chart and topped UK Albums Chart. The LP earned a gold status in the UK.

The four musicians often speak about their individuality. They say that they don’t have that much in common with One Direction and work hard to achieve international recognition.

How much does it cost to book The Vamps:
Price inquiry
The Vamps booking agent:
Contact agent
The Vamps Contacts:
Send The Vamps a message
« previous next »