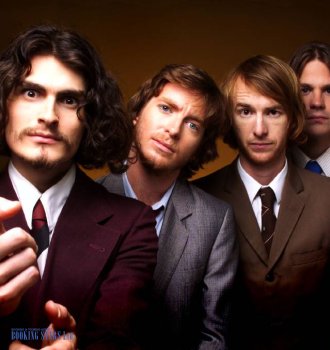 The founders of the Australian band Thirsty Merc, the guitar player Matt Baker, bass guitar player Phil Stack and drummer Karl Robertson used to work together between 1996 and 1998 in the group Drown, which performed in Dubbo. Then, Baker and Stack moved to Sidney to get an education.

In 2002, the two musicians returned to Dubbo. Upon coming back, Phil met a vocalist Tai Thistlethwayte, who also came from Sidney. The artists began working together as a duo. Then they invited Matt Baker and Karl Robertson to join them. The young men called the band Thirsty. They moved to Sidney and renamed the group to Thirsty Merc in honor of Rai’s Mercedes, which burned too much fuel.

In September 2003, the group presented its first EP, First Work, which came in 95th on the ARIA Charts. Thirsty Merc continued to perform in Sidney pubs trying to acquire fans and catch the attention of label representatives. They were noticed by Warner Music Australia. After two tough auditions, the musicians signed a contract.

In the spring of 2004, the band released the second track from First Work as a single. “Emancipate Myself” reached the 37th spot of the ARIA Singles Chart. In July, the group released the lead single from the upcoming album. “My Completeness” was a hit, which settled on the second spot of the Airplay Chart and came in 27th on the ARIA Singles Chart. At that time, many fans tried to book Thirsty Merc for private events.

In August 2004, the artists presented their debut LP, Thirsty Merc, which came in 15th on ARIA Charts and settled on the 29th position of The Official New Zealand Music Chart. The same month, Matt Baker left the band. Sean Carey, who used to work with Midnight Swim, took his place. The refreshed lineup embarked on a tour of Australia to support the debut LP.

In November 2004, the musicians released a single Someday, Someday”, which topped Australian Airplay Chart and came in 14th on New Zealand Singles Chart. It settled on the 19th spot of ARIA Singles Chart. In April 2005, the band released a single “In Summertime”, which came in 9th on Australian Airplay Chart and reached top-50 of the New Zealand chart. The single was used for a TV show Bondi Rescue. In August 2005, another single from Thirsty Merc, “When the Weather Is Fine”, was released.

In 2006, Thirsty Merc was working on a new album. In March 2007, the group released one of the new singles from the upcoming LP, “20 Good Reasons”, which became a hit on the Australian radio. It came in 4th on ARIA Singles Chart and 17th on the official New Zealand Chart. The single was used for promoting the Australian TV series Lost.

In April 2007, the artists presented their second LP, Slideshows, which came in 4th on the Australian chart and 38th on the New Zealand Chart. To promote the album, Thirsty Merc went to tour Australia. In September, they released a new single, “The Hard Way”, which reached the 63rd spot of the ARIA Singles Chart. In December, another single, “Those Eyes”, came out and settled on the 53rd spot of ARIA Singles Chart.

In January 2010, Sean Carey left the band for personal reasons. Matt Smith took his place. In May, the group released a new single “Mousetrap Heart”, which came in 30th on ARIA Singles Chart. In June, the band presented its third LP, Mousetrap Heart, which settled on the 14th spot of the national chart. In July, the band embarked on a tour of Australia.

In 2014, Karl Robertson left the band and it turned into a trio. In September 2015, Thirsty Merc record a new LP, Shifting Gears, which came in 68th on ARIA Chart.

The band continues working on new songs and performing live.