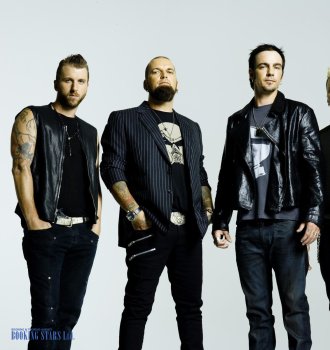 The rock band Three Days Grace was formed in Ontario, in 1997. The current lineup includes Brad Walst, Neil Sanderson, Barry Stock, and Matt Walst. The band is particularly famous for such hits as “I Hate Everything About You”, “Animal I Have Become”, and “Never Too Late”. In 2007, the band was named Rock Artist Of The Year by Billboard.

The musicians met a local producer Gavin Brown, who agreed to take a look at their records. He chose several songs and helped the band record a demo album, which the group sent to EMI label. EMI was interested in the band but asked for more songs. Together with Brown Three Days Grace recorded the debut single “I Hate Everything About You”. The single was a success and resulted in several offers from the labels. Eventually, the band signed a deal with Jive Records.

In 2003, the band released the first studio album Three Days Grace. The LP reached the 9th spot on Canadian Albums Chart and the 69th spot on Billboard 200. Eventually, the album was certified platinum in Canada and the USA. The single “I Hate Everything About You” was included in the album and brought the band international popularity. For two years after the release, the band was touring in support of the LP.

In 2006, the band released the second studio album One-X, which was even more popular than the predecessor. Considering the fact that the band went through serious problems, such as drug addiction of the guitarist, the success of the LP was impressive. The LP reached the 2nd spot on Canadian Albums Chart and the 5th spot on Billboard 200. Eventually, the album was certified platinum twice in Canada and three times in the USA. The LP sold 78,000 copies during the first week of sales in the US.

In 2012, the band released another album Transit of Venus, which was just as popular as their previous LP. Three years later, they recorded a new album Human, which became an international hit. The band continues to record new songs and performs live.