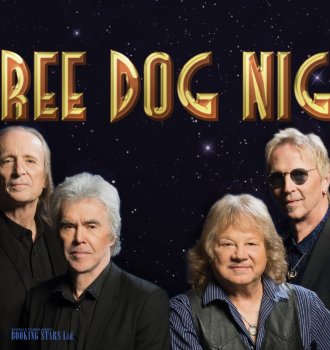 The rock band Three Dog Night was formed in 1967, in California. The current lineup includes Danny Hutton, Michael Allsup, Paul Kingery, Pat Bautz, David Morgan, and Howard Laravea. The band is particularly famous for such songs as “One”, “Mama Told Me Not to Come”, and “Shambala”. In 2000, the band was inducted into Vocal Group Hall of Fame.

Between 1969 and 1974, not too many bands managed to create as many top-10 hits and sell as many concert tickets as Three Dog Night. During those years, it was the most popular American band. 21 of their songs in a row managed to enter top-40 of Billboard Hot 100, 18 of their songs entered the top-20, 11 entered top-10, and 7 topped the chart. They sold about 7 million copies of singles and released 12 golden albums. By 1975, the total number of sales passed the 50 million dollar mark. It’s interesting to note that each of the band members tried singing solo and didn’t manage to become successful.

When the band members got together, they tried singing acapella and decided to form a group. Danny Hutton called his friend Brian Wilson from Beach Boys and he helped the band with their first steps in the music world. At first, the band was performing at the nightclubs, where their met Turtles manager Bill Utley. He helped the members sign a contract with Dunhill Records and release their debut album Three Dog Night (1968), which was an immediate hit.

After the release of their first LP, the band started creating one hit after another. It’s interesting to note that the band didn’t just perform original songs. They often produced cover versions of the hit songs of other artists. Such interesting approach coupled with regular concerts led to a big success of their albums, which were turning golden in a flash.

By 1975, the musician decided that they were tired of the music business and decided to take a break. In 6 years, they came back to the industry but had to deal with the drug problems of several members. The lineup suffered several changes and the band continued to perform. However, they didn’t manage to restore the past popularity. Three Dog Night continues to perform live.