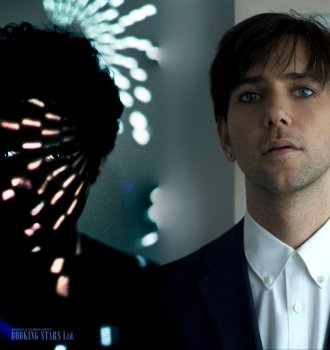 Tiga-  is a Canadian electro-clash musician, DJ and producer. Tiga James Sontag was born in Montreal, Canada in 1974. His album Sexor won the 2007 Juno Award for Dance Record of the Year.
He graduated from Selwyn House School, a prestigious school in Westmount. Before starting producing, Tiga promoted rave parties in his hometown. It was in the early 1990s, I was one of the promoters of the SONA club. In 1994 he opened DNA Records, and in 1998 founded his own label, Turbo Recordings.

A worthy addition to the number of electroclash-club makers. This new name - Tiga (Canadian DJ Tiga Sontag) is far from a newcomer to the fashionable dance ring. Those who constantly and non-stop sticking out on the dance floors have long noticed a very original track "Sunglasses At Night" performed by Tiga & Zyntherius. This is a cover version of the song of the new 80s romantic Corey Hart. So, you won't find this thing on this album, but you will be provided with a whole dozen of fiery electro-dance action movies, excluding the intro introduction "Welcome To Planet Sexor" and the interrogatively incomprehensible track "Who's That?" This guy set the tone for the entire dance fraternity a year ago in a company with the famous supplier of electronic dance hits David Guetta. All of Ibiza exploded with an electrical charge "Louder Than A Bomb". This is a recitative reading of a topic from Public Enemy. The next monotonous song, which is equivalent to her in fiery filling, is again built on the clearly planned beat "Pleasure From The Bass". It follows the bomb, and was also part of the "Little Bit Of Synthy" compilation at the time.

But in addition to the above-mentioned compositions, which are performed in a hard rap intonation against a dance background, the rest of the things are like a balm for the soul of synthpop fans. "(Far From) Home" is one of the strongest and most compelling songs on the entire album. And the version of this theme in high-speed mode ("The Speed ​​Of Sexor Reprise") deserves to be included in the annals of the synthpop collection.

His love for dance electronics since the late 80s, when he traveled to various rave parties with his father, later grew into independent "DJing". Remixes of Depeche Mode and Pet Shop Boys were flying out from under his turntables. Not surprisingly, such a similarity in intonation and musical constructions with the "boys from the pet store". Tiga's cover version of "Down In It" by famous gurus of the industrial world Nine Inch Nails sounds special. Therefore, it is very problematic to recognize the original here. Monotonous vocal singing in the version by Tiga resembles the voice of Neil Tennant from Pet Shop Boys. "The Ballad Of Sexor" adds romance to the previous theme. Tiga tried to use other people's borrowings on the album by 30 percent for sure. The fat burned composition "Burning Down The House" takes us back to the 80s, and specifically to Talking Heads.

The album as a whole turned out to be a curtsey back to the future. Everything is energized. Suitable for dance floors, but it was possible for the tracks to format the time-footage or build in such a way that they followed each other non-stop, since Tiga is not the first year at the control panel. Here is a small wish for a musician and a DJ in one person for the future.