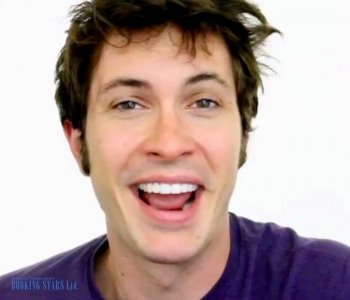 He has 3 channels. Toby refers to his fans as the Audience. In his vlogs, he starts off by saying 'Audience?! What are you doing...'

He was born in Mississippi and grew up in Niceville, Florida.

Toby starred in the horror movie "Smiley" and also appeared on Cartoon Network's "Annoying Orange" as Nerville. He has a dog named "Gryphon" (AKA Falcor) who frequently appears in his vlogs, and more recently in his Tobuscus videos. He has a sister named 'Angie' who sometimes appears in his vlogs.

Tobuscus
Toby's main channel, Tobuscus, is currently one of the top 500 most subscribed channels on YouTube. He is known for his former viral video review series called "Cute Win Fail", which was in partnership with America's Funniest Home Videos. CuteWinFail and Toby Turner are no longer working together. You can find the Cute Win Fail channel by clicking here. About once a week Toby uploads sketches, Tobuscus Adventures, which is an animated series featuring him and his friend Gabuscus; music videos such as "The Dramatic Song", "Safety Torch" and "The Sideburns Song"; as well as "Literal Trailers", the most popular of them being his "Literal Assassin's Creed Brotherhood trailer".

TobyGames
Toby's gaming channel, TobyGames has over 6.8 million subscribers and 1.9 billion video views. He is well known for his Minecraft, Skyrim, Happy Wheels, Slender, and Walking Dead series. Toby is currently playing Chair in a Room and Hover Junkers. His newest series is A Chair In a Room. He also runs a series of shorts called TobyGames Highlights, which as the title may imply, showcase Toby's funniest gaming moments.

Toby's vlog channel, TobyTurner, currently has over 2 million subscribers and 355 million video views. He posted daily vlogs there, which he calls LazyVlogs. They are one take daily video blogs that he records on his iPhone, talking about his day, upcoming events, and future plans for his channels.

You can win Tobuscus t-shirts from this channel by commenting on a random topic determined by Toby in his videos. The winner is selected at random.

Toby constantly receives items from fans and sometimes showcases them in his LazyVlogs.