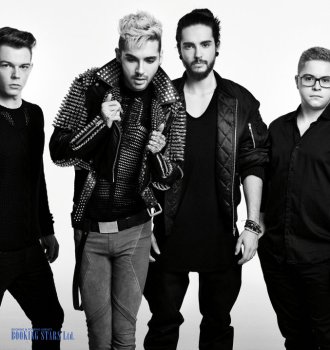 Tokio Hotel was formed in 2001 by four teenagers. Two leading members, Tom and Bill Kaulitz, are twins. They were born on 1 September 1989 in Leipzig. When brothers were 7 years old, their parents divorced. After some time, their mother married a musician. He was the one who helped boys cultivate the love for music. The stepfather taught Tom and Bill how to sing and play the guitar.

Bill was the better vocalist of the two. Meanwhile, Tom was an excellent guitarist. When Bill was 9 years old, he wrote his first song “Schwartz”, which he devoted to his pet mice. The twins rehearsed in the garage and gave small concerts for the neighbors. These concerts attracted a 13-year-old Gustav Schäfer, who played the bass guitar and a 14-year-old drummer, Georg Listing. The four musicians formed a band in 2001 and called it Devilish.

The teenagers played in local clubs and restaurants of their native town Magdeburg. They even recorded the first album with the same name as the group. The artists published 300 copies and sold them at their concerts. To promote the group, Bill Kaulitz participated in the talent show, Star Search, and made it to quarterfinals. Soon after that, Devilish attracted the attention of the producer, Peter Hoffmann. He came to listen to one of the band’s local concerts and decided that the artists had a bright future. Hoffmann turned out to be right.

Peter introduced the teenagers to three colleagues, who confirmed his decision about promoting the group. The producers suggested a title change. Bill, who was the band’s leader, came up with Tokio Hotel. After the contract was signed, the artists recorded several songs, one of which was "Durch den Monsun". It made the band popular in its native country and beyond.

The single topped German charts and achieved success in the UK, Canada, and Australia. The artists filmed a music video for the song, which collected over 17 million views on YouTube. High-quality music and a unique public image of the artists brought them vast popularity. Many organizers wanted to book Tokio Hotel for private events.

In 2005, the band presented its debut LP, Schrei, which featured 12 tracks. A year later, the musicians rerecorded the album because Bill’s voice started to break. They called the new disc, Schrei – so laut du kannst. It featured three additional tracks, one of which was Bill’s first song, "Schwarz".

The single “Schrei” became an anthem for the young generation in Germany. It was a protest against adults, who were teaching teenagers how to live their lives. To record a music video for the single, the band rented a two-story house and smashed the interior.

In 2007, the artists presented a new LP, Zimmer 483. Tom wrote one of the singles from the track list. The song "Reden" confirmed the musician’s reputation of a lady-killer. The same year, the artists decided to rename their popular hit "Schrei" to “Scream” and created an album with the same name for the English-speaking audience.

In 2008, Tokio Hotel was hoping to represent Germany on the Eurovision contest. However, the duo Alex Swings Oscar Sings! was chosen instead of them. In 2009, the artists presented a new album in two languages called Humanoid. It didn’t manage to receive too many positive reviews from the critics. Perhaps the reason was the change of genre. The band replaced rock with electronic music.

It took Tokio Hotel the next five years to finish working on the new album. During that time both Bill and Tom earned money by participating in ad campaigns for such famous brands as Reebok and Dsquared2. The twins appeared on the cover of Vogue and in the Audi commercial.

After the release of the long-awaited album, Kings of Suburbia, in 2014, the musicians embarked on a long tour of Europe, the USA, Asia, and Latin America. In 2016, Bill tried going solo and recorded an album, I’m not OK.

In 2017, the band released one more LP, Dream Machine. It reached the 5th spot on the national chart. In 2018, the artists went on a tour to support the latest album.

In February 2019, Tokio Hotel released a new single “Melancholic Paradise” for the upcoming album with the same name. The next single for the LP, When It Rains It Pours”, came out in April. After its release, the band went on a tour of Europe. The release date of the new album hasn’t been announced yet.