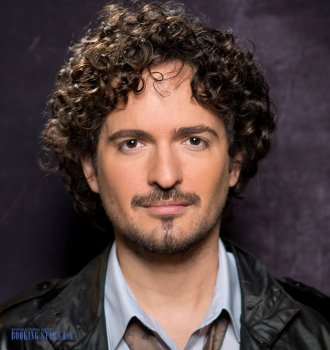 Tomas Torres Carrasquillo was born on November 25 1971, in San Juan Puerto-Rico. He fell in love with music when he was just a child. Torres learned how to play the guitar, violin, and piano.

In high school, he started writing his own music. Then the young man was accepted to Berklee College of Music, which he successfully graduated from with a double major in "Music Production & Engineering" and "Commercial Arranging". After college, he worked in New York City as a studio assistant at Sony Music Studios. In 1998, Torres moved to Miami, Florida where he started writing songs for various artists. His first song “No Puedo Olvidar” for MDO band topped the Billboard Hot Latin Tracks chart in 1999.

In the following years, he produced many albums for Latin artists and wrote music and lyrics for them as well. Torres worked with such famous artists as Ednita Nazario, Juan Luis Guerra, Draco Rosa, Ricky Martin, Juanes, Eros Ramazzotti and Ricardo Arjona. Albums recorded in collaboration with Tommy brought the artists fame and helped their songs to conquer the charts.
In 2007, Billboard Magazine named Torres “Number 1 Hot Latin Tracks Producer”. He became the first Puerto Rican to receive this title.

Aside from his success as a producer, in 2001, Tommy started a singing career. That year he released his first album Tommy Torres, which was nominated for the best debut album of the year on Premios Lo Nuestro.

In 2004, he independently released his second album, Estar De Moda No Esta De Moda. The single “De Rodillas” from the album became a hit in many countries including Peru and Panama.
His third album Tarde o Temprano was No. 1 on the Puerto Rico charts since its release and maintained its place for four consecutive weeks. It wasn’t very popular in Puerto Rico and the USA.

In 2008, the album was nominated for a Latin Grammy Award in the Best Singer-Songwriter category and Best Pop Album on Premios Lo Nuestro in 2009. Many clubs tried to book Tommy Torres to perform at their events.

In 2010, Tommy Torres received the Composer of the Year award at the ASCAP Latin Music Awards.

His last album to date 12 Historias was released in 2012 and once again became No. 1 on the charts and the leader in sales in Latin America.

In November 2012, Torres won the Latin Grammy Award for his single “Corre” recorded in collaboration with the Mexican duo Jesse & Joy. The music video for the song is the most popular Spanish music video on YouTube. It was viewed over 586 million times.