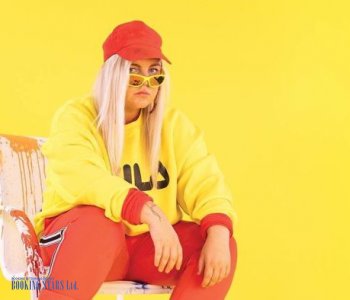 Tones and I - On the tenth day of May 2019, the young Australian singer Tones and I released the hit Dance Monkey, which by mid-September of the same year managed to break the record of fellow countrywoman Kylie Minogue in 1987, staying at the top of the ARIA Charts for more than seven weeks. In fact, the video also turned out to be very popular among YouTube users - in two months after its publication, the video gained almost 25.5 million views.

On the day of May 1993, on the 13th, a girl was born in the Australian state of Victoria, who later connected her life with music. Her real name is Tony Watson, but she became famous as Tones and I.

“I was once in a park with my family and cousins ​​in Frankston. We were all just singing a song, and my aunt said, "Guys, Tony is the best at drawing notes." I think this is the earliest memory that someone pointed to me as someone with the ability to sing. I was probably about 7 years old, ”the singer later recalled.

In high school, the student independently learned to play the synthesizer and drums, having purchased an RC-300 Loop Station phrase sampler with the money she earned. And from the age of four, basketball came into her life for a long time, which, like vocals, helped to cope with difficulties.

In view of her cheerful character and good sense of humor, the girl periodically uploads photos related to her early biography on Instagram, providing the pictures with funny comments. For example, in one of them, Tony, who was not slender in childhood, with a stern expression on her face, stands among a crowd of her peers. The signature for the publication read:

The performer prefers to keep her personal life secret, and instead of a possible young man, publish photos on social networks with friends, colleagues, fans and all those who contribute to the development of her work. Tony is still crazy about basketball, although she admitted that due to the complete immersion in music for sports, she has less and less time.

The talented Watson made her first attempts to perform in public at local music evenings and small festivals under her own name and surname. In 2018, the girl received permission to sing on Bourke Street in Melbourne, but friends advised her to stay in Byron Bay.

“I bought a van and took a two-week annual leave because I wasn't 100% sure it would work out. On the very first evening, when I was at the appointed place, a guy came up to me and gave me his business card. I had nothing to lose, and I called. As a result, he became my manager, ”said the performer.

Tony quickly became a famous street musician and even managed to win the corresponding battle.

On March 1, 2019, the debut single of Tones and I titled Johnny Run Away, written about his best friend Kurt Harboard, appeared on the Web, earning many rave reviews and flattering comments from Richard Kingsmill himself on the first day.

Two months later, the 100% hit Dance Monkey was released, immediately settling on the first positions of the prestigious charts in ten countries. In a funny video for him, Tony reincarnated as an elderly man who is ready to give odds to the young in terms of leisure.

Book Tones and I

How much does it cost to book Tones and I:
Price inquiry
Tones and I booking agent:
Contact agent
Tones and I Contacts:
Send Tones and I a message
« previous next »