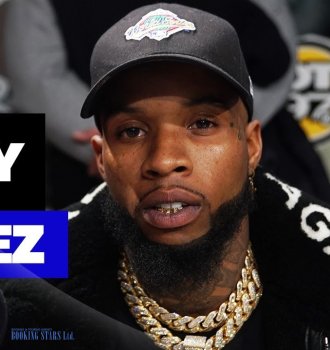 Tony Lanez’s real name is Daystar Peterson. He was born on 27 July 1992 in Toronto. Later, Daystar with his parents moved to Montreal. After a while, they relocated to Florida. The aspiring rapper demonstrated his talents when he was still a child. Daystar lost his mom rather early to a rare disease, the details of which aren’t publicized. The boy’s father was a missionary. That’s why the family moved around rather often. After his father remarried, they settled in Atlanta. The boy found new friends, who gave him a nickname Tory Lanez, which the rapper later used as a pseudonym.

When Daystar was a teenager, his father sent him to relatives in Jamaica to work on his bad behavior. Otherwise, he might have gotten into real trouble with the law. However, when Daystar was 15, he returned to Atlanta, because the grandmother couldn’t deal with him. The boy’s father refused to accept him. The young man started renting an apartment with two more people, whom he barely knew. Later, in the interviews, the singer said that those were the toughest years of his life. At that time, he decided to go back to writing lyrics and making music.

Tory Lanez began his career in 2009 with the release of the debut mixtape, T.L 2 T.O. The album caught the attention of a celebrity rapper Sean Kingston, who offer the aspiring singer assistance. Kingston helped Lanez collaborate with different famous musicians, including Justin Bieber.

The year 2010 was busy for the artist. He released four mixtapes, Just Landed, Playing for Keeps, One Verse One Hearse, and Mr. 1 Verse Killah. In the next three years, the artist came up with eight mixtapes.

In 2014, the rapper got a chance to go on a tour with other musicians, G-Eazy and Rockie Fresh. The “These Things Happen Tour” was a success and helped Tory acquire priceless experience of stage performance. The same year he released fairly successful singles, "The Godfather", "Dreams of Fuckin' an R&B Bitch", "I'll Be There", "Talk On Road", "Teyana", and "Balenciagas". However, they didn’t make it into the charts.

Between 2014 and 2015, Lanez worked on lyrics for other artists. He presented "Been Gettin' Money", performed by Akon and Jeezy, "Actin' Up", recorded for Casey Veggies, and "My Niggas", created for August Alsina and Meek Mill.

In 2016, the rapper finally released his debut LP, I Told You. The lead single, "Say It", which came out a year earlier, became a huge hit. It earned two platinum certifications in the USA and climbed to the 5th spot of the weekly R&B Songs Chart. At that time, many clubs tried to book Tory Lanez for their events. The LP came in second on Top R&B/Hip-Hop Albums and reached the 4th spot of Billboard 200. It also appeared on Canadian and New Zealand Charts. Other popular songs featured in the LP were "I Told You / Another One", "Flex", "Guns and Roses", and "To D.R.E.A.M."

In March 2018, Tory Lanez officially released his second LP, Memories Don't Die. It featured such guest as Wiz Khalifa, Future, Nav, Fabolous, 50 Cent, Mansa, and Paloma Ford. Among the successful songs were "Shooters", "4 Me", "Old Friends x New Foes", "Skrt Skrt", and "Benevolent." The album reached the third spot of Billboard 200. It appeared on many charts all over Europe, including the UK.

In October 2018, the rapper is expected to present a new LP, Love Me Now?. He also announced another album, El Agua, the release date of which is currently unknown.