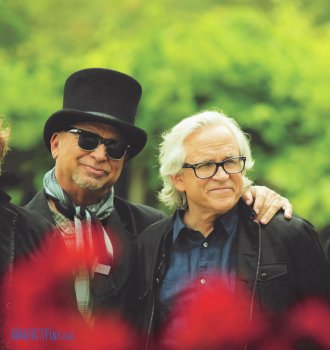 The rock band Toto was formed in Los Angeles, in 1977. The current lineup includes Steve Lukather, David Paich, Steve Porcaro, and Joseph Williams. The band is particularly famous for such songs as “Hold The Line”, “Rosanna”, and “Africa”. Toto earned several music awards, including six Grammies.

In 1976, Jeff Porcaro and David Paich decided to stop working for other bands and form their own group. They were joined by their school friends Steve Lukather and Steve Porcaro as well as Booby Kimball and David Hungate. The group started recording their studio album.

The first LP was released in 1978 and had the same name as the band. The LP included such singles as “Hold The Line”, “I’ll Supply The Love”, and “Georgy Porgy”. The album sold over 4.5 million copies worldwide, reached the 9th spot on Billboard 200 and the 37th spot on the UK Albums Chart.

Even though the first LP was a big success, the musicians spent some of their time working on other projects. So the release of the next LP Hydra was slightly delayed. It brought the band another one of the big hits “99”.

In 1981, the band was moving toward a heavier sound, however, the LP Turn Back was less successful than the predecessor. The band members changed the approach and released a very successful album Toto IV. It brought Toto 6 Grammy Awards and earned the band members international recognition. The hit singles from that album “Africa” and “Rosanna” earned high spots on Billboard Hot 100 and gold certifications.

Over the next decade, the band suffered several lineup changes. Hungate was temporarily replaced by Mike Porcaro. Kimball was replaced by Fergie Frederiksen. In 1992, Jeff Porcaro died from a stroke. However, the band continued recording new albums, none of which was as successful as their previous work.

In 2000’s the band released mostly compilation albums. They continue to perform live.

How much does it cost to book Toto:
Price inquiry
Toto booking agent:
Contact agent
Toto Contacts:
Send Toto a message
« previous next »