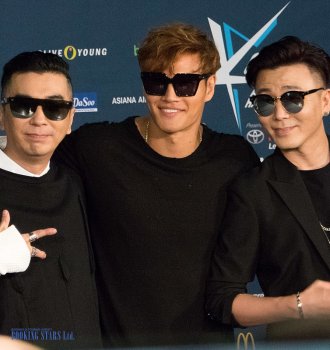 The popular band Turbo was created to be a competition for another South Korean dance project, Deux. In the duo, Kim Jong-kook was responsible for choreography and DJ Kim Jung Nam was the vocalist.

The group debuted in 1995 with the release of the LP, 280 Km/h Speed, the title of which fit the name of the band perfectly. The singles "검은 고양이" (Black Cat) and "선택" (Choices) became popular. The artists worked with the labels GM Agency and Doremi Media. The album didn’t manage to make it into any official charts.

In 1996, the musicians released another LP, New Sensation. This time, the album turned out to be commercially successful. It sold 800,000 copies in the first two months after the release. It was recorded with the assistance of GM Agency and Doremi Media. The singles "Love Is...(3+3=0)" and "어느 재즈 바... (At the Jazz Bar...)" became hits. The critics believe that the success of the second album was partially due to the pause in the Deux’s performances. One of the members of the competitor’s group suddenly passed away.

The same year, the band presented a new album, X-Mas Dance Party Mix with Turbo. Even though the fans gave it high scores, the album failed to make it into the charts. However, the organizers of private events actively tried to book Turbo.

Even though the band was climbing the ladder of success, it had numerous internal problems. Two months after the release of the latest album, Kim Jung Nam left Turbo. He decided to pursue a solo career.

Kim Jong-kook tried hard to look for a new partner and eventually, Mikey (Jo Myung-ik) appeared. Mikey was born in South Korea but moved to the USA when he was just 6 years old. Since childhood, Mikey was interested in South Korean music genres and dreamed of becoming famous. In 1997, he came to Seoul to participate in the auditions. Mikey was chosen among 3.5 thousand contenders. He conquered the label manager’s hearts by his perfect English and excellent rapping skills.

In October 1997, the new duo recorded the next album, Born Again, which came out on CD and on tape. The album didn’t appear on the charts but turned out to be commercially successful. It sold over 800,000 copies, which was great for the band.

In 1998, Turbo released the next LP, Perfect Love. The album climbed to the 23rd spot of South Korea Gaon Album Chart. It was a big success for the group, which finally made it into the official chart and immediately reached a high spot.

In January 2000, the artists presented a new LP, E-Mail My Heart. It climbed to the 3rd spot of South Korea Gaon Album Chart and sold over 600,000 copies. Even though the album was successful, it was the last one recorded by the band in the 2000s.

After the release, Kim Jong-kook decided not to extend the contract and went to pursue a solo career. Jo Myung-ik returned to the USA where he continued honing his vocal skills.

In 2015, all three members of the band decided to get together for Turbo’s 20th anniversary. They recorded an LP, Again, which came out in December. The album was released with the assistance of an independent label The Turbo Company. The fans were happy to accept the group back. The album climbed to the 3rd spot of South Korea Gaon Album Chart.