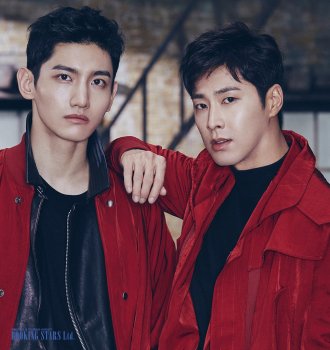 Today TVXQ’s lineup features two vocalists, U-Know Yunho and Max Changmin. But it wasn’t always this way. For a long time, the group performed with five members in the lineup. TVXQ’s story began back in 2003 when S.M. Entertainment started looking for a new boy band. The initial members were U-Know Yunho, Hero Jaejoong, Max Changmin, Micky Yoochun, and Xiah Junsu. They were chosen during special auditions and while participating in the reality show, Survival Audition – Heejun vs. Kangta, Battle. It took the label a while to find a name for the band. They went through half a dozen of different titles and eventually settled for TVQX.

The group debuted on a show with such artists as BoA and Britney Spears. It presented a hit single “Hug”. Later, the musicians worked with BoA to record “O Holy Night”.

In October 2004, the group released an LP, Tri-Angle. The album climbed to the 35th spot of South Korea Gaon Album Chart and came in 93rd on Japan Oricon Albums Chart. A month later, the new version of the LP TVfXQ! Special Photo Essay In L.A (Storybook) came out. Singles “Hug” and “The Way U Are” became highly commercially successful. Many fans tried to book TVXQ for their private events.

The first and so far the only EP, The Christmas Gift from TVXQ, came out in December 2004. It reached the 6th spot of the official South Korean chart, which was an excellent result for the band.

In 2006 and 2007, the artists released two albums for their Japanese audience, Heart, Mind and Soul and Five in the Black. The first one climbed to the 25th position of the Japan Oricon Albums Chart while the second made it into top-10. In Japan, the group released its albums with the assistance of the Rhythm Zone label.

In 2008, the artists recorded one more LP for their South Korean fans, which they called Mirotic. It topped the official South Korean Chart and came in 2nd on Taiwan G-Music Weekly J-POP Charts. In South Korea, the LP sold over 600,000 copies.

The same year, the group also worked hard for the Japanese fans. They recorded an LP, T. A year later, TVXQ released The Secret Code. The albums climbed to the 4th and 2nd spots of Japan Oricon Albums Chart accordingly. Singles “Song For You” and “Purple Line” earned a gold status in Japan.

In 2009, three out of five group members declared their protest against long contracts and busy schedules. The group stopped performing to settle the conflict. In 2011, TVQX came back as a duo.

The same year, they recorded a new LP, Keep Your Head Down. The decreased number of group members didn’t affect the popularity of their work. The album topped the charts. The single “Why Keep Your Head Down” sold more than 1.3 million copies.

The duo also continued working to make its Japanese fans happy. In September, the musicians released an LP, Tone, which topped Japan Oricon Albums Chart and came in 4th on South Korea Gaon Album Chart. The album sold 331,000 copies in Japan and 11,000 in South Korea.

In 2012, the band released another chart-topping album, Catch Me. It was the band’s first album to make it to Billboard’s World Albums Chart. It settled on the 6th position.

The next year, the group presented an album, Time, for its Japanese audience. It topped Japan Oricon Albums Chart.

The year 2014 was busy for the band. The artists released albums for South Korean and Japanese audiences. LPs Tense, Tree, and With achieved impressive popularity.

In 2015, TVQX recorded an LP, Rise as God. It topped the South Korean Chart and came in 6th in Japan.

Between 2015 and 2018, the group was on hiatus since one of the members served in the military. In 2018, the duo came back with two albums, New Chapter #1: The Chance of Love and Tomorrow (for Japanese fans).