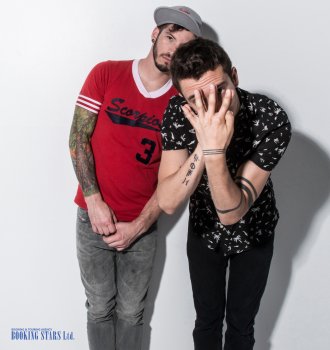 Twenty One Pilots (also written as TWENTY ØNE PILØTS and twenty one pilots) was created in 2009 by three friends: Tyler Joseph, Nick Thomas, and Chris Salih. At the end of the year, the band independently released its first LP Twenty One Pilots and started performing at the local nightclubs. The debut album reached the 139th spot on Billboard 200.

In 2011, Nick and Chris left the band, and Tyler was joined by Joshua William Dun. In the summer, the newly formed duo released the second independent album, Regional at Best. Even though the LP didn’t make it into the charts, the band became very popular. It was nominated for MTV Europe Music Awards as "Best Push Act".

The popularity led to a contract with Atlantic Records, which the artists signed in the spring of 2012. After the signing, they immediately started recording their first official EP. Three Songs came out in July. It featured three songs: "Guns for Hands", "Migraine," and "Ode to Sleep". Shortly, the duo started working on their first professional LP, Vessel.

In September 2012, the band released the first single from the upcoming album "Holding On to You". Earlier, the song appeared in Regional at Best, but didn’t earn popularity. This time, it managed to reach the 32nd spot on US Rock Airplay and the 10th position on Billboard Alternative Songs Chart. The single was also very popular in Belgium, bringing the musicians the long-awaited international fame. Many event organizers tried to book twenty one pilots but it was getting harder by the day.

After the release of the music video for "Holding On to You”, the band was nominated for MTV Video Music Awards as "Artist to Watch". After some time, the song received a platinum status from RIAA.

The duo’s first commercial LP, Vessel, came out in January 2013. Even though the critics didn’t give it highly positive reviews, the album earned international fame and entered charts in 14 countries. The LP reached the 21st spot on Billboard 200 and the 39th spot on UK Albums Chart. The album became very popular in South Korea. By 2016, Vessel sold over a million copies in the USA and earned a platinum certificate. It also became “golden” in Canada and the UK.

In 2014, the band was nominated for three Alternative Press Music Awards as "Album of the Year" (for Vessel ), "Breakthrough Band," and "Best Live Band".

In March 2015, TWENTY ØNE PILØTS recorded a new single from the upcoming album. "Fairly Local" reached high spots on the charts. Later, it was certified platinum.  Two more singles from the new LP came out in April. The music video for one of them, "Stressed Out," was immensely popular on YouTube and collected over a billion views.

Blurryface came out in May 2015 and immediately topped Billboard 200. It entered the charts of 24 other countries. The album earned a variety of platinum certificates and many awards, including Billboard Music Awards, American Music Awards, and MTV Europe Music Awards. That LP became the most successful album released by the band to date.