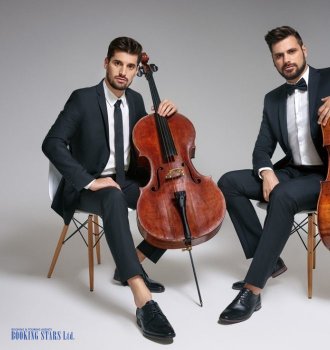 2Cellos is a duo, which was established in Croatia, in 2011. The duo consists of Luka Sulic and Stjepan Hauser. The hold several awards, including Porin and Japan Gold Disc Awards. They play cello rock and classic instrumental music.

Stjepan Hauser was born on June 15, 1986, in Croatia. His parents also pursued music careers. Hauser studied in London and then in the USA. He holds a variety of prestigious music awards. Stjepan won 21 natironal and international music competition. Hauser was one of the last students of Mstislav Rostropovich.

Luka Slic was born on August 25, 1987 in Crooatia. He studied at the Royal Academy of Music in London. Luka holds various awards. He performs solo in his native Croatia and abroad.

The duo became famous after recording the cover version of Michael Jackson’s “Smooth Criminal”. The song was uploaded to YouTUbe and was viewed 3 million times in juust two weeks. Since then the number of views reached about 25 million.

In 2011, the duo signed a contract with Sony Masterworks. The same year they signed a deal wioth Elton John to join him on his word tour. They released their first album 2Cellos, which was a big hit. It topped the Croatian Albyms Charts, reached the 85th spot on Billboard 200 and topped Billboard Classical Music Chart. The LP was certified golden by Croatian charts.

The duo went on to record three more albums. Each one of them was successful. Their latest LP to date Score (2017), topped the Billboard Classical Music Chart. 2Cellos also performed in a variety of successful music videos, including “Welcome To the Jungle”, “Hurt”, and “The Show Must Go On”. 2Cellos continue to record new music and perform live.