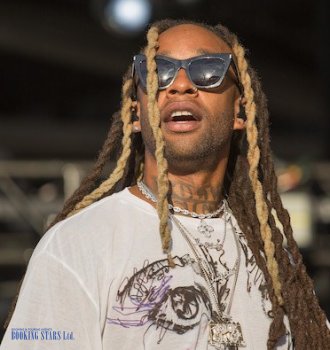 Ty Dollar Sign’s real name is Tyrone William Griffin, Jr. His pseudonym is often written as Ty Dolla $ign. The singer was born on 13 April 1985 in Los Angeles. He loved music since childhood thanks to his father’s guidance. Griffin’s father was a member of the funk band Lakeside between 1995 and 1997. As a boy, Tyrone spent many hours listening to his father play music. He was influenced by Earth, Wind & Fire and Prince.

In 2007, Ty and his colleague Kory created a duo, which caught the attention of the representatives of Venus Brown and Buddah Brown Entertainment labels. With their help, the duo recorded its debut mixtape Raw & Bangin Mixtape Vol 2, which didn’t achieve any commercial success. The musicians performed as guests with such artists as Sa-Ra Creative Partners and Black Milk. The group fell apart shortly, less than a year after its formation.

After the duo disbanded and before starting a solo career, Ty worked with the rapper YG. Together they formed a label Pu$haz Ink. In 2011, the singer released his debut single “All Star”, which didn’t make it into the charts. However, another single “My Cabana”, recorded together with Young Jeezy, appeared on Complex's Best 50 Songs. In 2012, the musician helped form a production company D.R.U.G.S. with DJ Mustard, Buddah Shampoo, Nate 3D, DJ Dahi, and Fuego.

The same year, the singer signed a contract with Atlantic Records and recorded the debut EP, Beach House. The album’s guests were Wiz Khalifa, Too $hort, Kirko Bangz, and Juicy J.

In 2013, together with Khalifa and A$AP Rocky, the rapper went on a tour called Under the Influence of Music 2. Upon returning, he released a single, “Paranoid”, recorded together with B.o.B. The single reached the 29th spot on Billboard Hot 100 and earned a platinum status in the USA. Later, the song was featured in the rapper’s EP. The second single from the EP was “Or Nah”, which also earned formidable popularity.

The year 2015 was busy for the musician. He released his debut LP, Free TC. It featured such hits as “Blasé”, "LA", "Straight Up", "Saved", "Know Ya", and "Horses in the Stable". The LP was popular and commercially successful. It climbed to the 4th position of Top R&B/Hip-Hop Albums and settled on the 14th spot of Billboard 200. The LP also appeared on the charts of Australia, France, the UK, Canada, and Belgium. Many clubs tried to book Ty Dolla Sign for public and private events.

In 2016, the rapper presented his most successful mixtape, Campaign. It featured such hits as "Campaign", "Juice", and "Zaddy". The album appeared on the 28th position of Billboard 200 and the 7th spot of Top R&B/Hip-Hop Albums.

In 2017, Ty released his second LP, Beach House 3. The most popular songs were "Love U Better", "Ex", "So Am I", and "Pineapple". However, they didn’t make it into the charts. The LP climbed to the 11th spot of Billboard 200 and the 8th position of Top R&B/Hip-Hop Albums. The album’s guests were Pharrell Williams, Damian Marley, Tory Lanez, The-Dream, Lil Wayne, Future, Swae Lee, YG, Wiz Khalifa, and Lauren Jauregui.

In September 2018, the musician presented his fourth LP, MihTy, It was a joint effort with the rapper Jeremih. Even though the album was expected to be popular, it hasn’t made it into the charts just yet.