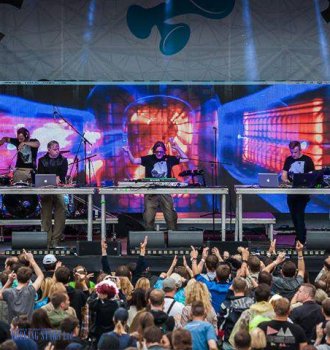 U96 – dance music band from Germany

The band U96 was formed in Hamburg, Germany in 1991 by four producers, Alex Christensen, Helmut Hoinkis, Ingo Hauss, and Hayo Lewerentz. For a long time, Alex was the key figure of the band. However, today, Ingo and Hayo are its leading members.

In the 1980s’, Christensen started working as a DJ and performed at local DJ parades. He didn’t have sufficient connections or money to record his own songs. In order to be closer to show business, he got a job at a recording studio. He was moving boxes with records. The job helped Alex meet the members of a production team Matiz. They were Ingo, Hayo, and Helmut. Christensen shared his ideas about forming a group, and the musicians agreed to try.

In 1991, the artists got an offer to make a techno adaptation of the soundtrack to the movie “Das Boot”. The original of the song was created by a composer Klaus Doldinger. The musicians managed to adapt a song in such a manner that it became an anthem for the techno music genre.

At the beginning of the 1990s, techno wasn’t too popular. The radio stations were focusing mostly on pop music. However, the song “Das Boot” was a huge hit at all concerts. Meanwhile, the radio completely ignored it. The song didn’t come with a music video, so it didn’t get promoted on TV. Fans could get a chance to listen to “Das Boot” only by buying tickets to the concerts.

After some time, the musicians finally found an opportunity to release “Das Boot” as a single. They also filmed a music video using snippets from the movie. It helped U96 became truly popular. The four artists decided to continue working together.

In 1992, the band released its debut LP, Das Boot. It featured hard techno music. The album sold over a million copies and reached the 11th spot on the national German chart. It also earned a gold certification.

In 1993, the artists presented their next LP, Replugged. The style of the album was similar to the predecessor’s. The LP got to high spots on many European charts.

In 1995, the band released its next LP, Club Bizarre. For recording it, the artists decided to add female vocals. They invited German singers, Daisy Dee and Skadi Lange. Singles "Love Religion" and "Club Bizarre" became hits, which later turned into the 1990s classics.

The new LP came out in 1996. The artists called it Heaven. The album became commercially successful all over Europe. It featured Eurodance songs. Later, the group recorded two singles with Dea-Li, Seven Wonders" and "Calling The Angels". Both became hits.

Right after Heaven’s release, the group started working on another project with Dea-Li called Rythm of Life. However, the release was cancelled due to the waning popularity of Eurodance. The band changed the sound to electro and tried to rectify the lack of success by releasing new singles, "Energie" and "Beweg Dich, Baby". Even though the band’s popularity was decreasing, many organizers kept trying to book U96 for private events all over Europe.

At the beginning of the 2000s, Christensen turned to pop music since it had better commercial potential. He worked as a producer for such popular German artists as Yasmin K. During that period, the rest of the band members recorded several songs without Alex. Due to some disagreements, they soon left the band. Alex was joined by Stefan Hafelinger.

After a long break in recording studio albums, the band released a new LP, Out of Wilhelmsburg. Alex Christensen created it with the assistance of the artists he used to work as a producer for. However, the old members recorded several songs for the album as well. It was the first LP released by U96 not to make it into the top-100 of the German charts.

In 2010, Hafelinger left the band. All the rights to the group belonged to Alex Christensen. The ex-members Ingo Hauss and Hayo Lewerentz decided to reboot the band and called their new duo U96 Reboot. They recorded several songs and released a music video for the single “Planet Earth”.

In 2015, Ingo and Hayo convinced Alex to give them the rights for the original band name. Christensen left the band. Currently, Ingo and Hayo are the only two members of the band, who write lyrics, produce songs, and perform live.

In 2018, U96 released its last album to date, Reboot. It featured 25 tracks, many of which became popular. The artists are recording new hits and performing live.

Cost to book U96:
Price inquiry
U96 booking agent:
Contact agent
Contacts:
Send U96 a message
« previous next »