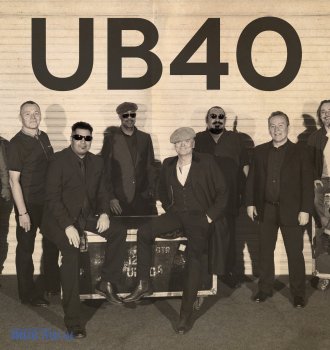 Reggae band UB40 was formed in England, in 1978. The current lineup includes Jimmy Brown, Robin Campbell, Earl Falconer, Norman Hassan, Brian Travers, and Duncan Campbell. The band is particularly famous for such songs as “I Got You Babe”, “I Can’t Help Falling In Love With You”, and “Higher Ground”. The band has been nominated for a Grammy Award four times.

The band members bought their first musical instruments using the money Ali Campbell (ex-member) got as compensation for a bar fight. Some of them had to learn how to play the instruments while rehearsing. By 1979, the band members did such a great job playing together that they were invited to go on a tour where they performed as an opening act for Pretenders, who were very popular at the time.

In 1980, the band released their first single “Food For Thought”, which reached the 4th spot on the UK Singles Chart. The band was famous for its energetic live concerts. They were enough to make UB40 very popular. Neither the label nor the media did anything for their promotion. UB40 managed to become famous on its own. The same year, the band released two more singles “My Way Of Thinking” and “The Earth Dies Screaming”, which also became hits. Some time later, UB40 released their first LP Signing Off. The LP reached the 2nd spot on the UK Albums Chart and was eventually certified platinum.

In 1981, the band members established their own label DEP International. The first song they released was “One In Ten”, which was a big success, entering the top-10 of UK Singles Chart. The second album Present Arms was just as successful as the first one and went platinum.

In 1983, the band finally topped the charts with their album Labour Of Love. It received two platinum certifications in the UK, one in Canada, and one in the USA.

In 1986, the band released a popular single “I Got You Babe”. The single topped many charts and kept the group’s popularity alive. Throughout the 1980’s the band gave a big variety of concerts in Europe, USA, and even the Soviet Union.

The band took a break in the early 1990’s but then came back with a hit song “I Can’t Help Falling In Love With You”. In 1993, they released another successful LP Promises and Lies.

In 2000’s the band’s popularity began to wane slightly but their LPs kept getting good spots on the charts. UB40 is still recording new songs and performing live.