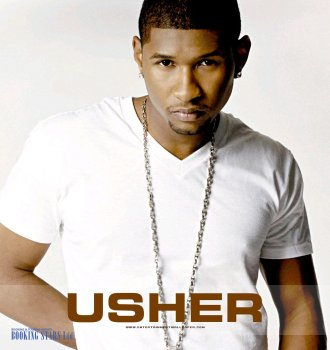 Usher is an American actor and singer performing in hip-hop and r'n'b styles.

Usher - R&B sex symbol "I am the male version of Madonna," Asher says. However, with such a self-confident statement, contrary to the ancient assertion that a person's name speaks for him (Usher is translated from English as "doorman"), it is hardly possible to argue lately.

Like many musicians, he spent his childhood in the church choir, getting carried away with gospel music and performing at various competitive events. Asher's first major victory can be considered the Grand Prix of the Star Search television competition for young talents. A year later, during the next show of young talents, the young singer was offered to record a contract with La Face Records. At that time he was 14 years old!

His career took off right away - recording for the Poetic Justice soundtrack, singles Call Me A Mack and Can U Get Wit It lit up the R&B chart. And the song Think Of You aroused increased interest from fans and quickly turned into a dance hit. The La Face label promoted Usher, focusing not so much on his music and vocals as on his cute face. She was generously shown in video clips, she was successfully presented to the multimillion army of fans of the super popular TV show Oprah Winfrey; Asher voiced the jingle for the Coca-Cola commercial.

But the dear boy began to turn into a man, and here he faced serious difficulties - and here the voice mutation was not long in coming. To cope with all this, Asher had to show remarkable energy and zeal. Proving his creative competence, he wrote more than half of the songs for the new album and himself participated in the selection of producers. The studio sessions were supervised by Jermaine Dupri and Babyface.

The artist's second album, My Way, was released in 1997. With the appearance of the new single You Make Me Wanna on the air, it became clear that a new star was sparked in American R&B. The song My Way, the leader of the rhythm and blues chart for 8 weeks, was destined to become the first number one pop hit in the artist's career. The new image of the matured Asher, the fine-tuned dance moves shown in the videos, as well as the first-class production of Germain Dupree did their job. Album My Way soon went double platinum.

The success of Madonna and Will Smith in two fields at the same time haunted Asher for a long time. But before he seriously took up his film career, he recorded for the soundtrack to the film Kazaam with Shaquille O'Neal and took part in the soundtrack to the film Soul Food. By this time, Usher had already had a small role, but so far only in the daytime television series The Bold And The Beautiful ("Daring and Beautiful"). And on the big screen, he made his debut in 1998 in the acclaimed horror film The Faculty. A year later, the guy starred in the new film Light It Up ("Light it up, guys"), a melodrama about the life of high school students. Over time, two more serious film works appeared in his track record.

The pauses between studio sessions were filled not only with filming, but also with more or less active concert tours. An idea of ​​the artist's live performances is provided by a 1999 live album entitled simply Live.

At the end of 2000, Asher released a mini-disc All About U. There were several more records accumulated in the storerooms, and already in 2001 the album 8701 was released (The title is encrypted the date of publication: August 7, 2001. There are other versions decoding of these numbers: reading from right to left date 10.78 (October 1978, date of birth of Asher) and the last digits of two important years in the singer's career: 1987, when he first performed on stage, and 2001, when this album was recorded.). The disc marked the beginning of a new important stage in Usher's creative biography: from a pop idol, the idol of teenagers, he grew into an independent size, a real big R&B artist. This did not escape the attention of the professionals: for two years in a row, in 2001 and 2002, at the Grammy ceremony, Asher received the title of the best male R&B artist with the tracks "U Remind Me" and "U Don't Have to Call" ...

The super popularity achieved by Asher, of course, attracted the attention of the press, which was discussing his personal life with might and main. The increased attention to the singer was also due to the fact that he began an affair with Rosonda Thomas, known as Chilli from the female R&B trio TLC. (Chilli also starred in the music videos U Remind Me and U Got It Bad.) Almost everyone claimed that this relationship with Usher with a woman seven years older than him, who also had a child from a famous person (producer Dallas Austin), did not last long. will last. And so it happened.

The next replenishment of the singer's CD catalog had to wait for several years. Meanwhile, Asher had a lot to do. He founded his own label, Us Records, and began producing aspiring artists.

In early 2004, the single Yeah! is a collaborative effort between Usher, Lil Jon and Ludacris and can be safely called the 2004 song. This eye-catching, energetic number quickly became a club hit and became a radio favorite. By the time the new Confessions studio album went on sale, the track Yeah! was already recorded at the top of the Billboard rankings. The Confessions long-play, which managed to lead the Canadian hit parade, the Internet album rating and the R & B chart, went straight to the first line of the pop chart. Spent ten consecutive weeks at the head of Billboard 200 Confessions and, with no other megastar releases on the horizon, with its 4 million circulation is still the best-selling album of 2004. A million copies of the album sold in its first week set a record: the highest in the first week in the history of American rhythm and blues. In September 2004, the artist was honored at the World Music Awards. Asher received as many as three statuettes: as the best performer on a global scale, as the best pop artist and as the best rhythm and blues performer.

Despite the fact that not much time has passed since the release of the album, new releases were not long in coming. In October 2004, Usher released another version of the Confessions album, which included several tracks that were not included in the first edition. Also on this disc was the song My Boo - a duet with Alicia Keys. (At one time there were rumors about the nascent romance of two R & B stars, but it was nothing more than gossip. And over the past time Asher himself managed to change the girls he met several times; one of his most notable companions was Naomi Campbell herself.) 2004 the year turned out to be as successful for Alicia as it was for Usher - she collected many awards for her album The Diary Of Alicia Keys. No one doubted that this stellar duo was doomed to success. And so it happened: the song My Boo, also released on the single, topped the Billboard hit parade. For the same Billboard, the singer became a perennial favorite: in December 2004 at the Billboard Music Awards, Usher received as many as 11 awards. And in February of the following year, he won three Grammy and three Soul Train Awards, including for the song My Boo.

A few weeks before receiving the prizes, Usher released a DVD with his video clips - Rhythm City: Caught Up Vol.1. After that, he announced that he would pay more attention to filming in films.

And who knows where this resourceful, talented and charming guy is striving, but we can say with confidence that any mountain will move, just as soon as he says "Yeah!"

Usher is a great choice for your event! Book a famous singer on our website online!

How much does it cost to book Usher:
Price inquiry
Usher booking agent:
Contact agent
Usher Contacts:
Send Usher a message
« previous next »