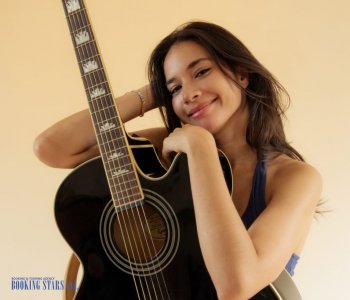 A Thai-Italian female artist, Valentina Ploy is the newest face of What The Duck Music label. She takes control in every music- making process and also gets work support from “Pong- Pokpong Jitdee” or “Pong of Plastic Plastic,” a talent producer of this generation who has collaborated with number of famous artists including Scrubb, Stamp Apiwat and many more. Valentina Ploy born and raised in Italy. She starts her music journey at the age of 7 by writing songs in her own diary and starts learning to play violin and guitar since then. Following her dream of being an artist, she decided to participate in The X Factor Italy in 2016. In 2017, she then joined The Voice Thailand Season 6, in Joey Boy’s team and got until the battle round. Besides her music set of skills, she interests in language and culture. She can speak 5 languages including Italian, Thai, English, Spanish and French. She also joined the Miss Universe Thailand 2018 competition and she got in the top 5, getting the 2nd runner up position. She released her first debut single since February 2019 and the song has hitted over 1 million streamings on Spotify.