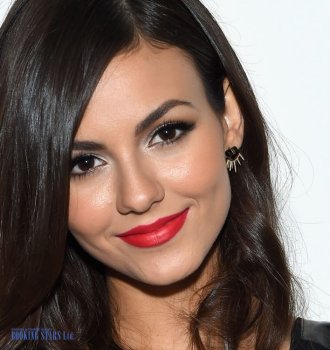 Victoria Justice – actress, singer, and model from the USA

Victoria Dawn Justice was born on 19 February 1993 in Hollywood, Florida. When the aspiring actress turned 20, her family moved to Hollywood, CA in order to pursue the young woman’s acting career. Victoria debuted on the TV screen in one of the episodes of Gilmore Girls.

On the big screen, the actress first appeared in the short thriller Mary in 2005. The same year, Victoria participated in filming several advertisements for Ralph Lauren, Guess, Mervyn's, Gap, and other brands. At the same time, she started acting in the TV series Zoey 101, where she played the role of Lola Martinez. In 2006 and 2007, all actors of the series earned a prize at Young Artist Awards in "Best Young Ensemble Performance in a TV Series (Comedy or Drama)" category.

In 2007, Victoria began her singing career by recording a cover version of Vanessa Carlton’s "A Thousand Miles" for Zoey 101.

In 2009, Justice landed one of the leading roles in the TV musical Spectacular!, where she performed with such celebrities as Nolan Gerard Funk, Simon Curtis, Tammin Sursok, and Andrea Lewis. In the film, Victoria sang three songs. Then she continued to work on supporting roles in the TV series, such as iCarly, True Jackson, VP, and The Troop.

In 2010, Victoria finally got a leading part in the TV movie The Boy Who Cried Werewolf, which became very popular and earned positive reviews from the movie critics.

In March 2010, Nickelodeon started showing a comedy series Victorious, where Victoria had the starring role. The series was nominated for an Emmy award for times. For her work in the series, Victoria earned Nickelodeon Australian Kids' Choice Awards as "Hottest Girl Hottie" and several other categories.

In November 2010, the lead single "Freak the Freak Out" from the soundtrack album Victorious came out. It reached the 50th spot on Billboard Hot 100, which was a record for a soundtrack. The single also settled on the very top of US Top Heatseekers.

In 2011, the album itself came out. All the songs were performed by Justice. The LP debuted on the 5th spot on Billboard 200 and topped US Kid Albums and US Soundtracks charts.

In 2012, Victoria worked on one of the leading roles in the teen romantic comedy The First Time and another comedy, Fun Size.

In 2015, the drama series Eye Candy came out. Victoria played the leading part of an expert hacker Lindy Sampson. The same year she worked on the starring role in a romantic drama Naomi and Ely's No Kiss List.

In 2016, Victoria landed a starring role in the musical comedy The Rocky Horror Picture Show: Let's Do the Time Warp Again. She performed several songs, which came out as a soundtrack album with the same name.

In April 2017, Justice appeared in the teenage comedy The Outcasts, where she had the leading role.

Even though Victoria has a tight schedule, she finds time to perform at the private events.