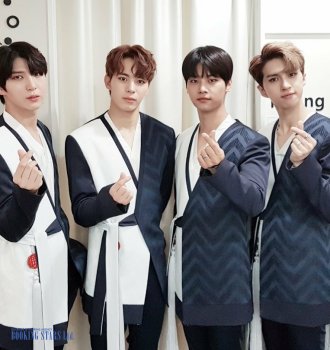 South Korean k-pop group VIXX was formed in Seoul in 2012. The lineup includes N, Hongbin, Leo, Hyuk, Ken, and Ravi. The band appeared thanks to the support of the label, Jellyfish Entertainment. The company selected the vocalists during reality shows. The majority of them participated in MyDOL.

The band debuted in May 2012 with the song “Super Hero” on the TV show M! Countdown. In July, the musicians went to Baltimore, USA, to perform at an anime convention. In August, they presented the second track, "Rock Ur Body". In September, VIXX participated in its first live concert in Zepp Diver City concert hall in Tokyo.

In 2013, the musicians continued working very hard. Many fans tried to book VIXX for private events but usually got a negative reply. The band recorded a single album, On and On, which climbed to the 4th spot of South Korea Gaon Album Chart. The artists also presented an EP, Hyde. The album climbed to the third spot of the national chart and appeared on the 7th position on Billboard’s World Albums Chart.

The same year, the group debuted with its first LP, Voodoo. It featured such tracks as "Super Hero", "Rock Ur Body", "On and On", and "Hyde", which were released earlier. The first single climbed to the 112th spot of South Korea Gaon Singles Chart. The second came in 118th. The last two achieved better results, settling on the 25th and 35th positions accordingly.

Single album Eternity came out in 2014. It featured just four songs, "Eternity" (two versions), "Sad Ending", and "Love, LaLaLa". The album climbed to the top of South Korea Gaon Album Chart and came in third on Taiwan G-Music Weekly J-POP Charts. For its Japanese fans, the band recorded an album, Error, which climbed to the 6th spot of Japan Oricon Albums Chart.

In February 2015, the group recorded the next single album, Boys' Record, which topped South Korea Gaon Album Chart and Taiwan G-Music Weekly J-POP Charts. In September, the band released a new album for Japanese fans, which got the name Can't Say. It climbed to the 4th position of Japan Oricon Albums Chart.

In November, the artists presented their second LP, Chained Up. It topped South Korea Gaon Album Chart and Taiwan G-Music Weekly J-POP Charts. The album also made it into Billboard’s World Albums Chart and settled on the 3rd spot there. Singles "Eternity", "Error", and “Chained Up” became hits. The latter sold 185,000 copies.

In 2016, for its Japanese fans, VIXX recorded an LP Depend on Me and a single album, Hana-Kaze (花風). The former reached the 4th place of the official chart while the latter came in third. The same year, the musicians recorded an EP, Kratos, which climbed to the 2nd spot of South Korea Gaon Album Chart and came in 5th on Taiwan G-Music Weekly J-POP Charts and Billboard’s World Albums Chart.

In 2017, the artists recorded an EP, Shangri-La, for the Korean fans and Lalala ~ Aiwo Arigatou ~ - for the Japanese fans. The first one sold 88,000 copies in South Korea. About 30,000 copies of the second one were sold in Japan. Promo singles with the same names as the albums became successful.

In 2018, VIXX recorded two EPs, Eau de VIXX for Korean audience and Reincarnation for Japanese fans. Both albums climbed to high places on the official national charts. The first one settled on the third spot of Billboard’s World Albums Chart.