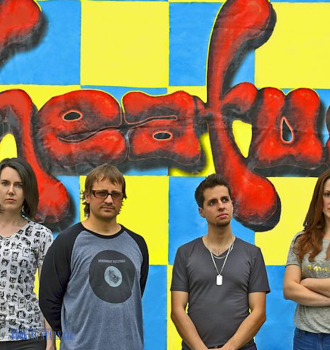 An American rock-band called Wheatus became famous in 2000, when they released their hit number one "Teenage Dirtbag", which was chosen as a soundtrack for a teenage romantic comedy "Loser".
The band appeared in 1995, when its founder, solo singer and guitarist Brandon Brown decided to turn his childish hobby into lifetime project. His main superheroes were AC/DC and Willie Nelson.
So, in 1995 Brandon started to write his own songs. His approach was extremely unusual - at first, he came up with the name of the song, then he thought about the story and after that lyrics appeared. In collaboration with his brother Peter who used to play drums and their friend Philip who was a back-vocalist they started releasing their own tracks. Some time later Wheatus started playing at different local stages.
The first album of Wheatus was launched in 2000, and there was their hit number one under the name "Teenage Dirtbag". The song was popular not only in the USA, but in other countries - for instance, "Teenage Dirtbag" hit number one on the Australian music chart during 4 weeks. The single was also chosen as a soundtrack for a romantic comedy "Loser".
In 2002 Wheatus began to work at their second album, which was released in 2003 under the name "Hand over your Loved Ones". One year later the band created their own label "Montauk Mantis".
In 2003 the third album called "Too Soon Monsoon" was released, and then the musicians did not lead an active creative work. The next album of Wheatus was launched only seven years later. In 2013 Wheatus made their fans happy with an album "The Valentine LP".
In 2015 the band released their live-album.
It is said that Wheatus are going to release the seventh album. The first track "Tipsy" is already available on the Internet.
Book Wheatus