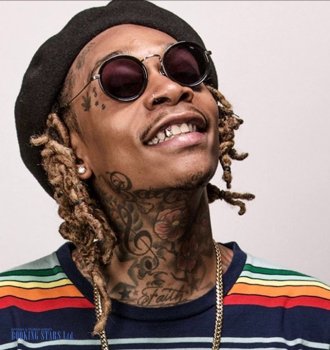 Whiz Khalifa’s real name is Cameron Jibril Thomaz. He was born on 8 September 1987 in South Dakota. His parents served in the military and traveled a lot. They divorced when Cameron was 3 years old. Thomaz traveled around the world with his family. He lived in Japan, Germany, and the UK. Finally, he settled in Pennsylvania and graduated from Taylor Allderdice High School.

Camera came up with his unusual pseudonym thanks to his Muslim grandfather. Grandfather’s ideas had a lot of influence on the boy’s mindset. The word “Khalifa” is Arabic or “successor”.

In 2005, the young man got a chance to work in a studio. He presented his debut mixtape Prince of the City: Welcome to Pistolvania. It came out thanks to the representatives of Rostrum Records, who saw something special in the ambitious young man. A year later, the artist presented the first studio album, Show and Prove. It sold 10,000 copies in the first week. The LP featured such songs as "Keep the Conversation", "History in the Making / Never Too Late", "Locked & Loaded", and "Let 'Em Know". The album didn’t chart.

In 2007, the rapper signed a new contract with Warner Bros. Records. They released two successful mixtapes Grow Season и Prince of the City 2. The next year, Wiz presented Star Power.

The year 2009 was very productive for the singer. He released three mixtapes (Flight School, Burn After Rolling и How Fly) and one studio album, Deal or No Deal. The singles "Moola and the Guap", "'Bout Ya'll", and "Right Here" became hits. In the first week, the LP sold over 167,000 copies.

Khalifa was working very hard. His continued recorded one mixtape after another. In 2011, the rapper presented a new LP, Rolling Papers. It reached the second spot on Billboard 200 and sold 197,000 copies in the first week. Later, the LP earned two platinum certifications in the USA. Back then, many fans tried to book Wiz Khalifa for their events, but it wasn’t easy.

In 2013, Wiz and Curren$yruen recorded Live In Concert.

The year 2016 was busy for Wiz. He released another mixtape Cabin Fever 3 and the album Khalifa. He also worked with different artists to record such LPs as TGOD Mafia: Rude Awakening and TGOD Vol. 1.

In 2018, the rapper’s fans are expecting the release of a new LP, Rolling Papers 2.