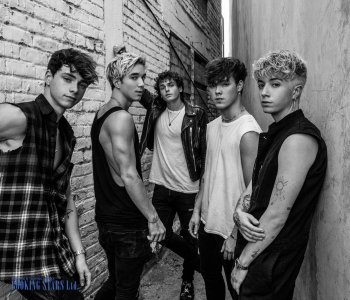 Why Don't We - A 21st century boy band comprised of social media stars.

A pop dream for the 21st century, vocal harmony group Why Don't We comprise social media stars from across America. Following a handful of EPs, they garnered widespread attention with 2018's 8 Letters, which landed in the Top Ten of the Billboard 200.

Singers Jack Avery, Corbyn Besson, Zach Herron, Jonah Marais, and Daniel Seavey all came from different places in the U.S., but they each gained some measure of social media fame due to their posts on outlets like YouTube. They first became acquainted on social media tours such as DigiTour, and formed Why Don't We in 2016. The group's first single, "Taking You," appeared in October 2016, followed the next month by their debut EP, Only the Beginning. Their first live shows happened in December of that year. Two more EPs arrived in 2017, Something Different and Invitation, followed at year's end by the holiday EP A Why Don't We Christmas.

A pair of singles, "Trust Fund Baby" and "Hooked," came out in the first half of 2018, paving the way for the group's full-length debut album, 8 Letters. Released that August, the set netted a Top Ten placement on the Billboard 200 chart. Why Don't We spent 2019 issuing a steady stream of singles like "Welcome to Brazil," "Unbelievable," and the Macklemore-assisted "I Don't Belong in This Club." After going on a brief hiatus in early 2020, the group returned with "Fallin' (Adrenaline)" as the first single off their sophomore full-length album, The Good Times and the Bad Ones. The record arrived in January 2021 and featured production by singer Seavey and Jaycen Joshua.

Book Why Don't We