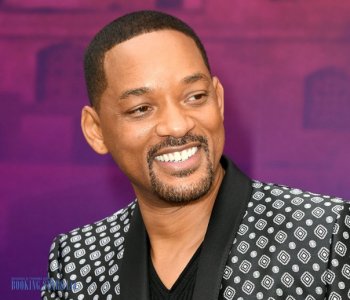 Will Smith transitioned from successful rapper to Hollywood A-lister, starring on 'The Fresh Prince of Bel-Air' before headlining such films as 'Independence Day,' 'Men in Black' and 'Ali.' After Will Smith met Jeff Townes at age 16, the duo launched a highly successful rap career as DJ Jazzy Jeff & The Fresh Prince. Smith starred on the sitcom The Fresh Prince of Bel-Air for six seasons, before establishing himself as a Hollywood A-lister with Bad Boys (1995) and Independence Day (1996). He has since headlined such popular films as Men in Black (1997) and Hitch (2005) and earned Oscar nominations for Ali (2001) and The Pursuit of Happyness (2006). Smith also earned acclaim for Concussion (2015), before returning to action fare with Suicide Squad (2016).

Early Life
Smith was born Willard Carroll Smith Jr. on September 25, 1968, in Philadelphia, Pennsylvania, to mother Caroline, a school board employee, and father Willard C. Smith, a refrigeration company owner. His middle-class upbringing saw him attend the strict Our Lady of Lourdes Catholic School, despite his family's observation of the Baptist faith. He went on to attend Overbrook High School.

His West Philadelphia neighborhood was a melting pot of cultures where Orthodox Jews co-existed with a large Muslim population. Smith was a good student whose charming personality and quick tongue were renowned for getting him out of trouble, a trait for which he soon gained the nickname "Prince.''

Smith began rapping at age 12, emulating heroes like Grandmaster Flash but tingeing his rhymes with a comedic element that would later become his trademark. At 16 Smith met future collaborator Jeff Townes at a party. The pair became friends, and the duo DJ Jazzy Jeff & The Fresh Prince was born.

As teens, DJ Jazzy Jeff & The Fresh Prince began producing music but steered clear of the gangsta rap sound that was emerging from the West Coast by groups like N.W.A. The Fresh Prince rapped about teenage preoccupations in a clean, curse-free style that middle America found safe and entertaining. The pair's first single, "Girls Ain't Nothing But Trouble," was a hit in 1986. Their 1987 debut album, Rock the House, hit the Billboard Top 200, and made Smith a millionaire before the age of 18. The early success put any thoughts of attending college out of Smith's mind.

Early on, it was reported that Smith had turned down a scholarship to Boston's elite Massachusetts Institute of Technology (MIT), but Smith later dispelled the rumor when he told an interviewer: "My mother, who worked for the School Board of Philadelphia, had a friend who was the admissions officer at MIT. I had pretty high SAT scores and they needed Black kids, so I probably could have gotten in. But I had no intention of going to college."

In 1988, DJ Jazzy Jeff & The Fresh Prince continued their success with the album He's The DJ, I'm The Rapper. Featuring the radio-friendly singles "Parents Just Don't Understand," "Brand New Funk," and "Nightmare on My Street," the album won the first-ever Grammy Award for Best Rap Performance. It was followed in 1989 by And In This Corner..., which continued the pair's rise to stardom.
Movies and TV Shows
'The Fresh Prince of Bel-Air'
Two years later, Smith began his crossover into acting. Drawing on his experiences with fledgling stardom, NBC signed Smith to headline a sitcom about a street-smart kid from Philadelphia who moves in with stuffy relatives in the posh Los Angeles neighborhood of Bel-Air. Playing on his rapper persona, and at times featuring his friend Towne, The Fresh Prince of Bel-Air was a huge success that ran for six seasons.

Meanwhile, Smith and Towne continued producing music, their 1991 album Homebase producing the hits "Summertime" and "Ring My Bell." Their final album together, 1993's Code Red, was notable for "Boom! Shake the Room."

'Where the Day Takes You' and 'Six Degrees of Separation'
While still making The Fresh Prince of Bel-Air, Smith began a second crossover into movies. Small roles in the drama Where The Day Takes You (1992) and the comedy Made In America (1993) were followed by a critically acclaimed lead in Six Degrees of Separation (1993). Holding his own alongside Donald Sutherland, Stockard Channing and Ian McKellen, Smith played a street-wise gay hustler who cons his way through elite circles.

Smith's first steps into superstardom came with his next film, Bad Boys (1995). The high-budget cop movie saw him team up with comic Martin Lawrence, breaking away from the Black-cop-white-cop formula that had been so successful for Beverly Hills Cop and the Lethal Weapon series. The two Black leads proved an instant success and Smith — playing the smooth lady killer to Lawrence's clown — was established as leading man material.

Smith next took on the epic sci-fi flick Independence Day (1996), a role that confirmed him as a major player in Hollywood and the go-to guy for summer blockbusters. He played a pilot leading the counterattack against invading alien forces, and his comedic talents effortlessly transformed into the pithy one-liners all action heroes need to be able to drop while dispatching their enemies.

'Men in Black' and 'Enemy of the State'
Smith fought aliens again in his next blockbuster, the comic sci-fi action film, Men in Black (1997). Playing opposite Tommy Lee Jones, Smith chewed up the screen as the new recruit to Jones' old hand. Smith rapped the theme song, and its inclusion on his 1997 solo album, Big Willie Style, brought the multi-talented actor more success. Another blockbuster followed with the slick conspiracy thriller Enemy of the State (1998), which earned Smith an NAACP Image Award nomination for Outstanding Actor in a Motion Picture.

'Wild Wild West' and 'The Legend of Bagger Vance'
The string of hits came to an end in 1999 with Wild Wild West, a sci-fi cowboy Western co-starring Kevin Kline. Despite the film's lackluster box-office performance, the track Smith cut for the film became a hit on his 1999 album, Willennium. The golf movie The Legend of Bagger Vance (2000) was his next big film, with Smith playing the caddie to Matt Damon's out-of-sorts swinger.

The 2001 biopic Ali, based on boxing legend Muhammad Ali, gave Smith the opportunity to regain his big-screen swagger. His turn as the charismatic boxing great saw Smith put in the performance of his life, training and disciplining himself to extraordinary lengths to do justice to the athleticism — and ego — of the titular character. The film underwhelmed at the box office despite a record-breaking opening day, but Smith's performance was strong enough to garner him his first Academy Award nomination.

A couple of sequels were next, with Smith reprising his roles in Men In Black II (2002) and Bad Boys II (2003). Neither was a flop, but neither matched the impressive box-office take of its predecessor. Staying with the sci-fi action theme, Smith moved on to I, Robot in 2004. The Isaac Asimov adaptation featured Smith as a futuristic cop investigating a murder by a robot and then battling a robot insurgency. The film performed well, grossing more than $144 million domestically.

Smith's smooth-talking charmer persona was put to use in the 2005 romantic comedy Hitch, playing a dating consultant who helps luckless guys with their romantic moves. Smith also penned the theme song and included it on his 2005 album, Lost and Found. Hitch was a massive success, and it was followed in 2006 by another critical and financial hit, The Pursuit of Happyness (2006). Starring alongside his real-life son Jaden, Smith captivated audiences with the story of a single father who has to build a life from scratch. He received his second Academy Award nomination for Best Actor for his performance.

In 2007, Smith starred in I Am Legend, a remake of the Charlton Heston film Omega Man, in which he battled bloodthirsty vampires. The film became a national and international hit.

Smith then took on the dual role of actor and producer for Hancock (2008), in which he played an alcoholic anti-superhero, and for Seven Pounds (2008), about a man who sets out to change the lives of seven people. He also helped produce two more films released that year, Lakeview Terrace and The Secret Life of Bees.

After a hiatus, Smith returned to the big screen in 2012 with Men in Black 3, followed by a turn as a military commander in the critically panned M. Night Shyamalan sci-fi flick After Earth, which co-starred Smith's son Jaden. He then made a cameo as Lucifer in the film Winter's Tale (2014).

Smith's next leading role came with the 2015 heist caper Focus, co-starring Margot Robbie. Later in the year, he starred as Dr. Bennet Omalu in the sports drama Concussion, earning a Golden Globe nomination for his role as a doctor fighting to raise awareness about head trauma in NFL players.

In 2016, Smith starred in the DC Comics blockbuster hit Suicide Squad, which became his most successful film since 1996's Independence Day. The same year, he also took on a more somber role as a father who loses his young daughter in the drama Collateral Beauty. Although a follow-up endeavor, Bright (2017), was thoroughly panned by critics, audiences responded more positively to the urban fantasy crime flick.

'Aladdin,' 'Gemini Man' and 'Bad Boys for Life'
In February 2019, Smith announced that he would not be returning for the Suicide Squad sequel. Around that time, a commercial during the Grammy Awards revealed him as a wisecracking Genie in Guy Ritchie's live-action adaptation of Disney's Aladdin, which went on to top $1 billion at the global box office. Next up was Ang Lee's Gemini Man, which had Smith pulling double duty — with help from digital technology — as a 50-year-old assassin assigned to kill a 23-year-old version of himself.

The A-lister closed out the year by voicing super agent Lance Sterling in the animated Spies in Disguise, alongside Tom Holland, before opening 2020 with a return to his successful cop-buddy franchise in Bad Boys for Life.

Smith has been married twice. His first marriage, to Sheree Zampino in 1992, lasted only three years but produced a son, Willard Smith III (b. 1992), also known as Trey. He has been married to actress Jada Pinkett Smith since 1997. The couple's son, Jaden, was born in 1998, and their daughter, Willow, was born in 2000.

Smith leans politically liberal and has made donations to the presidential campaigns of Barack Obama. Smith is a fan of chess and video games and is known to take his mother on vacation every year, usually to the Canyon Ranch spa in Tucson, Arizona.