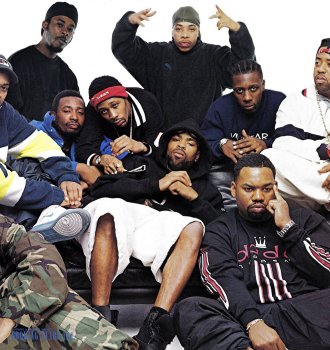 Wu-Tang Clan is a hip-hop band consisting of East Coast rappers. In the early 1990’s the rapper RZA came up with an idea to form a new group. For two years, he has been searching for the band members. Eventually, the artist found several musicians. The initial lineup included GZA, Method Man, Ghostface Killah, Raekwon, Inspectah Deck, U-God, Masta Killa, and Ol' Dirty Bastard. However, in 2004, Ol’ Dirty Bastard died. It took the band three years to find a replacement. Cappadonna joined the artists officially in 2007.

Two years after the formation, the group released its debut LP, Enter the Wu-Tang (36 Chambers). The album was produced by RZA. Even though the band was rather young, the success of the debut LP was overwhelming. It reached the 8th spot on Top R&B/Hip-Hop Albums Chart and settled on the 41st spot of Billboard 200. Such singles featured in the album as "Method Man", "C.R.E.A.M.", and "Can It Be All So Simple" reached high spots on different USA charts, including Billboard Hot 100 and Hot Rap Singles. Many fans and critics call this album one of the best creations in hip-hop history. After its release, many organizers and clubs tried to book Wu-Tang Clan for private events.

In 1997, the group released its second LP, Wu-Tang Forever. It was recorded with the assistance of such celebrities as Streetlife, 4th Disciple, True Master, and Tekitha. The album climbed to the top spots of Top R&B/Hip-Hop Albums, Billboard 200, UK Albums Chart, Canadian Albums Chart, Irish Albums (IRMA) Chart, and New Zealand Albums Chart (RMNZ). The LP sold over 2 million copies in the USA and earned four platinum certifications.

Three years later, Wu-Tang Clan presented the third album, The W. Again, the album climbed to high spots of numerous charts. It sold a million copies, earned a platinum status in the USA and a gold one in the UK. The most popular songs featured in the LP were "Gravel Pit", "Careful (Click, Click)", and “Protect Your Neck”. The first one was very popular in Germany and earned a gold certification there. It also climbed to the 6th spot of the UK Singles Chart.

In 2001, the artists presented another LP, Iron Flag. Ol' Dirty Bastard didn’t make any contributions to this album. The LP climbed to the 6th spot of Top R&B/Hip-Hop Albums Chart and settled on the 32nd position of Billboard 200. Almost 700,000 copies of the album were sold. The most popular songs were "Chrome Wheels", "Radioactive (Four Assassins)", "Uzi (Pinky Ring)", and "Iron Flag".

A six-year break in recording new albums was due to problems within the band. The death of Ol’ Dirty Bastard coupled with discontentment on behalf of U-God led to some disagreements. In 2004, the band reunited for a short European tour. In 2007, Cappadonna became an official member of the band. Together the musicians recorded 8 Diagrams. It was officially released on December 2007 under SRC label. The LP reached the 9th spot of Top R&B/Hip-Hop Albums Chart and came in 25th on Billboard 200.

Between 2007 and 2014, the rappers worked on their solo careers. Finally, in December 2014, the band released a new LP, A Better Tomorrow. It climbed to the 29th spot of Billboard 200 and appeared in the charts of Belgium, Canada, the UK, France, and Germany.

In 2015, the musicians recorded Once Upon a Time in Shaolin. Only one copy of the album was released. The songs were created for presentation at tours and festivals, not for commercial purposes.

The compilation album The Saga Continues came out in 2017. It reached the 15th spot of Billboard 200 and the 42nd position of the UK Albums Chart.

The group tours the world and performs at private events.