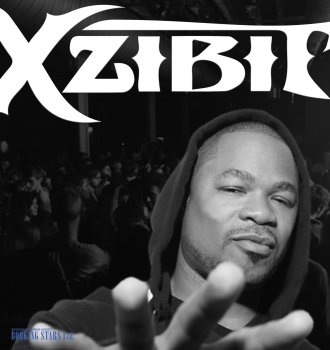 Xzibit’s real name is Alvin Nathaniel Joiner. He was born on 18 September 1974 in Detroit. His father left the family when Alvin was young. His mother was raising 5 children alone and died early. When the boy was 10, he had to move in with his father and his new family that lived in New Mexico. When Joiner was a teenager, he was involved in criminal activity. Surprisingly, during that time, the young man discovered rap. He started writing lyrics when he was 17.

Alvin’s career began when he joined the band Likwit Crew. In 1996, he decided to go solo and signed a contract with Loud Records. With the label, the musician recorded his debut LP, At the Speed of Life in October. For a newbie, the LP was very successful. It reached the 74th spot on Billboard 200 and came in 38th on Canadian Albums Chart.

The success of the first album inspired Alvin to work harder. In 1998, he released another LP, 40 Dayz & 40 Nightz. The critics gave the album excellent reviews. It climbed to the 58th spot of Billboard 200 and the 50th position of Canadian Albums chart. Such songs as "3 Card Molly", "What U See Is What U Get", "Nobody Sound Like Me", and "Chronic Keeping 101 (Interlude)" became hits. At that time, many organizers tried to book Xzibit for different events.

In 2000, the artist surprised the fans with Restless. It turned out to be the most commercially successful album to date. The LP was recorded together with с Erick Sermon, J-Ro, Tash, Defari, Goldie Loc, Kokane, DJ Quik, Suga Free, King T, and Butch Cassidy. It reached the 12th spot of Billboard 200 and sold 205,000 copies in the first week. Eventually, the album became platinum.

In 2002, the rapper released Man vs. Machine. It sold over 155,000 copies in the first week of sales and earned good reviews from the critics. The LP climbed to the 3rd spot of Billboard 200 and topped Top R&B/Hip-Hop Albums chart. Songs Symphony In X Major", "Choke Me, Spank Me (Pull My Hair)", "Losin' Your Mind", "The Gambler", and "Bitch Ass Niggas" became popular.

In 2006, the artist recorded another studio album, Full Circle. The LP was less commercially successful than Xzibit’s previous work. It sold only 17,000 copies in the first week and climbed the 50th spot of Billboard 200. The guests performers were DJ Quik, Tha Dogg Pound, The Game, Too Short, and T-Pain.

After a long break, the rapper presented a new LP in 2012. Napalm was recorded together with E-40, Bishop Lamont, Wiz Khalifa, Demrick, Game, Prodigy, and Crooked I. Alvin explained that he had to take a break due to an eventful acting career. In 2009 and 2010, the artist also had financial problems.

Xzibit diligently works on his acting projects. His portfolio features such movies as Seal Team Six: The Raid on Osama Bin Laden, Something from Nothing: The Art of Rap, The Bad Lieutenant: Port of Call New Orleans, Malice n Wonderland, American Violet, and The X-Files.

Even though Xzibit is busy conquering the big screen, he finds time for the music career. The artist participates in other rappers’ projects and records new music.