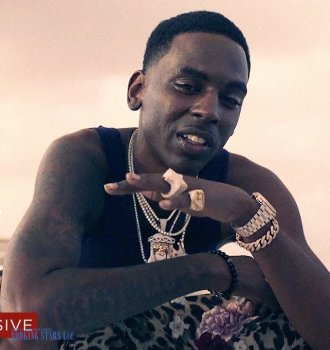 Young Dolph’s real name is Adolph Thornton, Jr. He was born on 5 March 1985, in Chicago, Illinois. The rapper’s pseudonym is the shortened version of his first name. When Adolph was 2 years old, his family moved to Memphis, Tennessee. The singer has 5 siblings. Even though Adolph doesn’t speak much about his childhood, it apparently was rather tough. In his song “Preach”, the words "Mama always in the streets, so guess who raised me?" seem to allow the rapper’s fans to peek into his past. Thornton’s parents used drugs. It forced all the five kids to become intendant rather early.

The year 2008 was tough for the artist. He got into a bad car accident and had to stay in the hospital for a long time. After leaving the hospital, Adolph found out that his grandmother died from lung cancer. These events became triggers for Young Dolph’s creativity. The music helped him survive through the tough times. Dolph often said that he doesn’t appreciate rappers singing about something they don’t understand. In his case, the lyrics are based on personal experience. The same year, Adolph released his first mixtape, Paper Route Campaign. The deep lyrics helped it become popular. At that time, Thornton worked with Paper Route Empire label.

Between 2010 and 2016, together with Paper Route Empire, Adolph recorded a series of mixtapes, which didn’t make it into the charts but became popular within a limited audience. In 2013, the rapper worked with 1017 Brick Squad to record a mixtape East Atlanta Memphis. Switching labels didn’t help the artist. The album didn’t become commercially successful.

In 2015, with 1017 Records and RBC Records, the rapper presented another mixtape, Felix Brothers, which was recorded with Gucci Mane and Peewee Longway. The same year, with Familiar Territory, he presented BagMen, featuring Peewee Longway.

In 2016, with Paper Route Empire, the rapper finally released his first LP, King of Memphis. The album turned out to be popular and commercially successful. It climbed to the 9th spot of Top R&B/Hip-Hop Albums, came in 5th on Top Rap Albums, and settled on the 49th position of Billboard 200. The album featured such hits as "Facts", "How Could", "Royalty", "Fuck It", and "Let Me See It". The guests were TM88, Mike Will Made It, Nard & B, Zaytoven, and Drumma Boy. Many fans tried to book Young Dolph for their private events.

In 2017, the artist became a victim of a shooting. His car was shot over a hundred times. Adolph was rushed to the hospital with serious injuries. There were rumors that the rapper was shot as part of the battle between him and another rapper Yo Gotti. However, neither of the parties confirmed them. Once more, difficulties helped the musician create interesting lyrics. He used the hype around the shooting to promote his new album, Bulletproof. The LP climbed to the 14th spot of Top Rap Albums, settled on the 19th position of Top R&B/Hip-Hop Albums, and reached the 36th place on Billboard 200.

Not all albums released in 2017 were successful. For example, Tracking Numbers, didn’t make it into the charts. The same year the rapper presented one more LP, Thinking Out Loud. It reached the 36th position on Billboard 200 and the 9th spot on Top R&B/Hip-Hop Albums. The singles ”Why U Here” and “Believe Me” became popular in the USA.

In 2018, the rapper released a new LP, Role Model. It climbed to the 15th spot of Billboard 200 and reached the 9th position of Top Rap Albums.