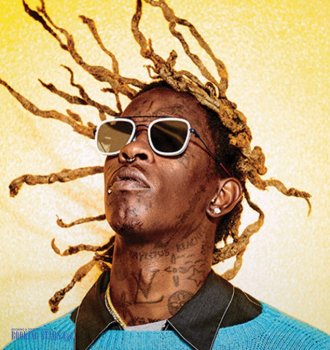 Young Thug (real name Jeffery Lamar Williams) was born on 16 August 1991 in Atlanta. He was the 10th child of 11 in the family. Jeffrey’s neighbors were such famous rappers as 2 Chainz, Waka Flocka Flame, as well as his childhood friend PeeWee Longway, who lived 3 blocks away.

In middle school, Jeffrey was jailed for 14 months for breaking his teacher’s hand.

Between 2011 and 2013, Williams, using the pseudonym Young Thug, released three mixtapes from the series I Came from Nothing. They caught the attention of the rapper Gucci Mane, who offered Williams a contract with his label Brick Squad Records. Soon, Young Thug released the first mixtape from the 1017 Thug series.

At the beginning of 2014, Williams presented his official debut single "Stoner". The song reached the 47th spot on Billboard Hot 100 and was rated gold by RIAA for selling over 500,000 copies. The musician became very popular. Many organizers were hoping to book Young Thug for their events. In July and August, Thug, Birdman, and Rich Homie Quan released a collective project called Rich Gang: Tha Tour Pt. 1. Soon he earned 3 BET Awards nominations but haven’t won any prizes.

In 2015, Young Thug released another commercial mixtape Barter 6. It was the rapper’s first album to enter Billboard 200. The mixtape reached the 22nd spot. At about the same time, Williams announced working on his first studio album, which he was planning to call Hy!£UN35 (pronounced as HiTunes).

In July 2015, he released the first single from the LP “Pacifier". The same year, the rapper worked on the Rae Sremmurd’s song "Throw Sum Mo." It was later nominated for a BET Award as "Coca-Cola Viewers' Choice Award". In the fall, Williams released two first parts of the mixtape series Slime Season. Both received good reviews from the critics.

At the beginning of 2016, the public saw a new mixtape I'm Up. It was the second album in William’s career to reach Billboard 200. Again, he went up to the 22nd spot. In March, Young Thug released Slime Season 3. The mixtape debuted on the 7th spot of Billboard 200.

In August, Williams presented another mixtape Jeffery, which managed to reach the 8th spot on Billboard 200. Many magazines, including Rolling Stone and Complex, called this album one of the best in 2016. In November, the rapper announced creating his own label, YSL Records.

In 2017, Young Thug received an MTV Video Music Award in the Best Editing category for the song "Wyclef Jean" featured in Jeffery. In June, Thug released another mixtape, Beautiful Thugger Girls, produced by Drake. It debuted on the 8th place of Billboard 200 and 4th spot of Top R&B/Hip-Hop Albums. In September, the musician released an EP Young Martha. In October, Jeffrey worked with Future to release a commercial mixtape called Super Slimey. It reached the 2nd place of Billboard 200 and topped Top R&B/Hip-Hop Albums.

As of the day the biography was written, Young Thug still hasn’t released his debut studio album, which he announced back in 2015.