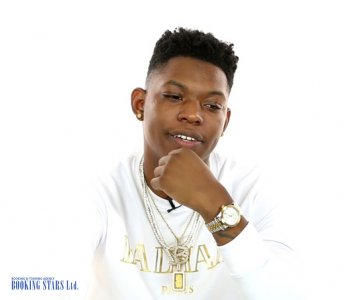 Alabamian Yung Bleu has been refining his dark, ominous style and increasingly intricate flows since the early 2010s.

The rapper and singer -- alternately known as Bleu Vandross, named after R&B legend Luther Vandross -- has experienced increasing levels of commercial success with heartfelt slow jams such as "Miss It" (2017) and "You're Mines Still" (2020). A Drake-assisted remix of the latter earned Bleu his first placement on the Billboard Hot 100 and took the deluxe edition of his EP Love Scars: The 5 Stages of Emotion into the Billboard 200.

Born in and based out of Mobile, Alabama, Yung Bleu (Jeremy Biddle) started rapping at the age of 11 and got into the game after he watched his brother interact with local hip-hop circles.

He entered the public arena during his late teens with self-released mixtapes like 2013's Hello World and then became involved with Young Boss Entertainment.

Over the ensuing years, Yung Bleu built his reputation on Investments (sometimes abbreviated as INV), a series of mixtapes with each successive numbered volume widening his scope. Around the same time, Bleu developed a working relationship with Boosie Badazz, collaborating with him on several tracks and landing a Columbia-supported deal with Boosie's Badazz Music Syndicate.

Bleu Vandross 3Bleu broke out in a big way with the 2017 single "Miss It" and continued to raise his profile with more installments of the Investments series, as well as streaming hits like 2018's "Unappreciated" and the Kevin Gates-assisted remix of "Ice on My Baby."

Bleu issued his final Columbia-distributed recordings, Bleu Vandross 2 and Investments 6, in 2019. He wasted no time launching the independent Vandross Music Group in 2020 with Bleu Vandross 3 and Love Scars: The 5 Stages of Emotions.

An alternate version of Love Scars highlight "You're Mines Still" added a verse from Drake and was placed on a subsequent expanded edition of the EP.

That October, the track entered the Hot 100 and simultaneously pushed the parent release into the Billboard 200.