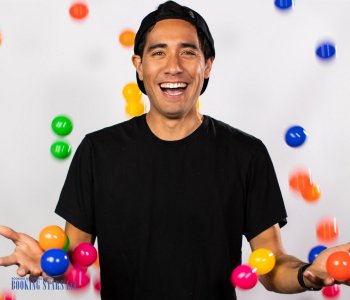 Zach King is a 30-year-old American filmmaker, YouTube personality, TikTok personality and former Vine video maker based in Los Angeles. With more than 45 million followers on TikTok, he is the third most followed personality on the platform.

Zach is best known for his “magic vines” videos, videos edited to make it look like he is performing a magic trick. He has been posting videos to YouTube since 2008 and joined Vine in 2013. He first joined TikTok in 2016, back when it was called musical.ly and quickly grew to several million followers.
Career
Zach King was born Zachary Michael King on February 4, 1990 in Portland Oregon. He is half Chinese, a quarter Nicaraguan and a quarter Austrian.

He got into video making at a young age and made his first video at seven years old with a home camera. At fourteen, King bought his first camera, tripod and Mac computer to start editing his own videos. In 2012, Zach graduated from Biola University with a degree in Cinema and Media Arts.

Zach joined Vine in 2013 after several of his friends made an account. After he joined, he posted one Vine a day for 30 days and saw significant success and growth on his account. He was featured in several media outlets for his vines, including Mashable and Complex magazine.

In an interview, Zach said it takes him more than 24 hours to create one Vine.

The videomaker joined TikTok in 2016 when the app was still called musical.ly. His first video showed him escaping a jail cell. In December 2019, Zach posted the most-viewed TikTok video ever. The video shows Zach riding a broomstick into thin air. Later, he revealed he was using a mirror and video editing magic. He’s now the third most followed TikTok personality.

In May 2013, YouTube named Zach one of 25 most promising filmmakers in the U.S. He won $35,000 in their “Next Up Creators” contest and won a trip to New York City to participate in their creator bootcamp. His video entry, “Contest Entry Gone Wrong,” showed Zach apparently dodging an assault by airstrikes, pleading to win the contest.

In 2014, he appeared on “The Ellen DeGeneres Show” and made Vine videos with the cast and crew of the show.

In 2016, Zach and wife Rachel competed on CBS’ “The Amazing Race” and came in sixth place. The couple now lives in Orange County and has two sons.