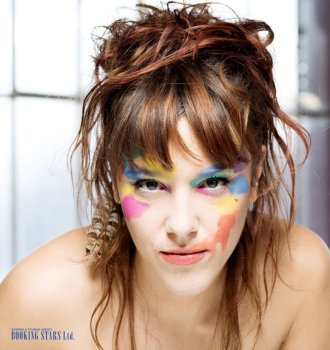 Zaz is the pseudonym of a French singer and songwriter, Isabelle Geffroy. The future star was born on 1 May 1980 in a small French town, Tours. Isabel has a brother and a sister. None of her family members are in the music business.

Zaz loved music since childhood. When she was five years old, her parents noticed the talent and helped the girl enroll at the music school. She learned to play musical instruments and studied choral singing. In 1989, the singer had to leave school because her parents divorced and she moved to Bordeaux with her mother. Soon, she started learning how to sing.

In high school, Geffroy wasn’t too good of a student. After failing exams, she had to repeat the year. The aspiring star didn’t appreciate the idea of staying in the same class for one more year and quit school. At that time, Isabel was just 15 years old.

She left home and moved in with her sister. The singer failed to get a diploma and had to get a job at a local restaurant.

While working as a waiter and washing dishes, Zaz was dreaming about a career of a singer. Soon, she got lucky. The regional council gave her a scholarship to study music in Bordeaux. Isabel left the restaurant and enrolled at the music college. She studied new instruments and honed her singing skills.

In 2001, Geffroy started working with the band Fifty Fingers as the vocalist. She collaborated with several local groups, including a jazz quintet. Then she joined an orchestra, Izar-Adatz, becoming one of the four regular vocalists. For two years, Zaz has been touring France with the project.

In 2002, Isabel got an opportunity to replace the vocalist of the group Don Diego. She performed Latin rock. When signing the contract with the group, the singer put “Z” instead of the signature. At that time, she adopted the pseudonym, Zaz, which stayed with her for many years.

According to the singer, Zaz is the artist’s unique style. It means all the music genres from A to Z and back. While working with Zaz, Don Diego performed French and Spanish music, combining it with Arabian and Latin melodies.

In 2006, Zaz moved to Paris and started performing in local bars and nightclubs. For a year and a half, she performed at a restaurant Aux Trois Mailletz every day. She got a chance to work at a drama studio but had to leave due to a tough schedule. Zaz stopped performing at clubs and moved to the streets of Paris.

In 2007, the singer got an offer for a producer, who was looking for a vocalist with a deep voice, He wrote a song, "Je veux", specifically for Zaz and found a publisher. The artist joined a new group, Le 4P, and released two music videos for the singles, "Rugby Amateur" and "L’Aveyron".

In 2008, together with the band, Sweet Air, Isabel recorded a concert album, which didn’t come out until she became famous. The next year, Geffroy won a talent contest, Le Tremplin Generation France Bleu/Reservoir, in Paris. It helped give a jump-start to her solo career.

In 2010, Isabel released her first LP, ZAZ. It immediately became commercially successful. Zaz earned popularity in France and beyond. The most popular single “Je veux" became a hit in France, Belgium, Switzerland, Canada, and Russia. To promote the album, the singer went on a long tour. She gave over 40 concerts abroad. Many organizers wanted to book Zaz for private events but her schedule was too busy at the time.

The first LP sold over 400,000 copies. It brought Isabel the title of the best signer in France according to several music magazines. She also got a prize at European Border Breaker Awards and many other awards.

In 2013, Zaz released her second LP, Recto Verso. It came in second on the national French chart and earned diamond status. The album climbed to high spots on the charts of many other countries and received platinum and gold certifications. Singles "On ira" and “Si” became hits.

One year later, the artist released the next LP, Paris, which brought her an Echo award in 2015. She was named the best international female pop/rock singer. The album climbed to high positions of the charts all over the world and earned three platinum certification in France. The most popular single featured in the album was “Paris sera toujours Paris". The music video for it collected over 10 million views.

In 2018, the singer presented a new album, Effet miroir. It came in 5th on the national French chart and became platinum. Singles "Qué vendrá" and "Demain c'est toi" turned into hits in Belgium.